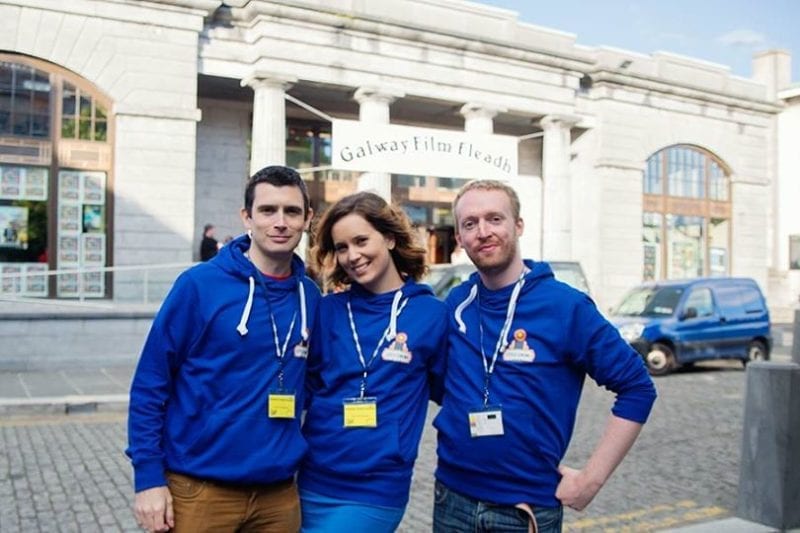 I asked Kenny Gaughan from the Little Cinema Galway about what has become a small Galway institution in its 7 year lifespan.

The Little Cinema Galway is at it’s core a monthly screening of short films. It’s held in the Roisin Dubh, Galway, and in general the majority of the films shown are made in Galway by local artists but there is also lots of filmmakers who travel from all over the country to screen there.
The Little Cinema was described as an “open mic for filmmakers” by Stephen Cadwell, a regular Little Cinema submitter. That’s probably the best description of what the Little Cinema is, and that’s the reason why it was set up in the first place; to give a place to “open mic” filmmakers who were still trying to develop their style or figure out their voice or what they wanted to say filmatically.
It was 2010 when the Little Cinema was set up myself (Kenny Gaughan), Julia Puchovska and Liam Doherty. We were making comedy sketches and realized that we had nowhere to screen them for the public, to get a real idea of how they would go down, away from the anonymous world of YouTube. We were self aware enough to know that what we were making was nowhere near good enough to submit to festivals, but we still felt that it deserved to get screened somehow.
From that initial chat after filming a sketch, the concept of the Little Cinema was formed. We’d screen films in as casual a way as we could, we’d try our very best to show everything that was submitted to us and it would be open to all levels of filmmakers. And all genres, comedy sketch, drama, horror, music video, art piece, documentary were all welcome. Quality wasn’t the main concern, instead it was to provide a platform for people to make stuff and screen it in a safe, friendly and non-judgemental environment.

The same rules are in place now as were back then; the films have to be under 10 minutes in length, they have to be original and the submitter has to be able to attend the screening to give their piece an introduction.
We’ve been running for 7 years now and we’ve screened a huge amount of films! We used to try and keep track of it, but it’s got to the point where we don’t try to keep track! We’ve screened amazing music videos, hilarious sketches, fantastic dramas, brilliant films, thought provoking and interesting documentaries and everything in between! The beauty of the Little Cinema nights is that you, the audience, literally have no clue what you might be watching that night! 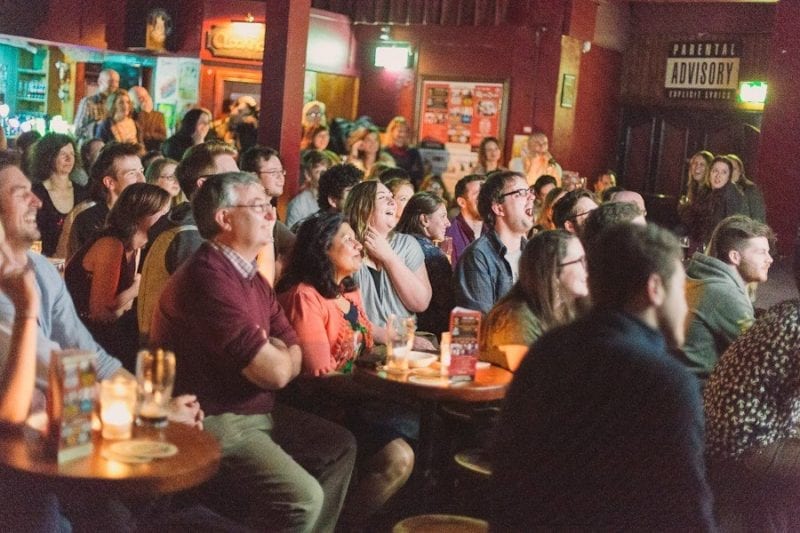 Having your film screened live is such an important part of being a filmmaker. It might sound pretty damn obvious when it’s written down like that. But it genuinely is sooooo important for a filmmaker to screen their stuff live to gauge what works and what needs to be improved. Especially in the early stages of ones film career.
You will learn more about editing while you watch your film with 100 other people looking on than you will learn in a year of film school. Suddenly every mistake is magnified *1000. Every scene that is taking too long feels like it’s in slow motion! But every laugh you get feels like a Carnegie Hall standing ovation! Every tear your film stimulates feels like a hug. And every compliment you get after your film feels like vindication for the countless hours you put into it.
Screening your films live allows a filmmaker to gauge audience responses & reactions and bear that in mind when writing and editing their next film. They find out what parts of their films are for them, and what parts are for the audience!

We try to make the screenings as casual as possible and make everyone feel as welcome as possible. During the introductions at the start of the night we emphasise that the audience plays a huge role in the night, it’s up to them to make the filmmakers feel at ease when they are welcomed on stage. Not everyone is comfortable in standing in front of 100 people and talking into a microphone, and so we try to give some ownership of the vibe and energy to the audience. We also stress to people that if they like a film, go up to the filmmaker and talk. Collaboration is so important in filmmaking and we try to encourage it as much as possible. Over the years, so many films have been made based on someone going up to a filmmaker and just getting chatting about their film. Before they know it, they’re exchanging ideas and plans are being made to create something together. 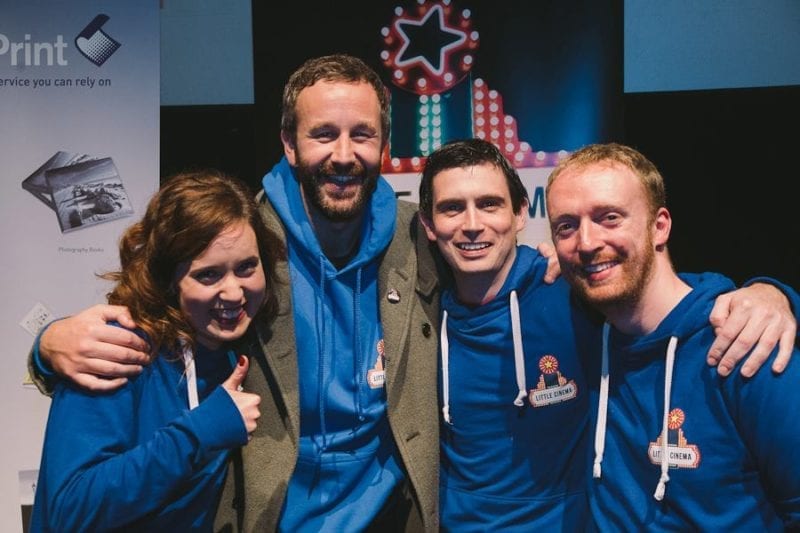 The social aspect of the Little Cinema Galway is almost as important as the film part! Many a first date has taken place at the Little Cinema, and when you think about it, it’s the perfect mix for a first date! You have the chance to have a couple of drinks if you want. You get the chance to chat for a while before it kicks off, and then you have a film every five minutes or so to have a chat about! Although it’s not like we’re counting or anything, but there is at least one couple who are married now that had their first date at the Little Cinema! Not quite Blind Date rates, but still good!
We screen each month on the last Wednesday at the Little Cinema, and we do our very best to not move from that so people can have a pretty good idea of when the Little Cinema is on. Through the years we’ve been very lucky with both our crowds and our submitters. It would be impossible to rely on one set of filmmakers to constantly keep making something every month for our screenings, but with the various film colleges in Galway, there is always a new wave of filmmakers coming to the city each year which is great for us. And as the name of the Little Cinema has spread further through the country, we regularly get submissions from all corners of Ireland which also adds a fantastic blend to the screenings. 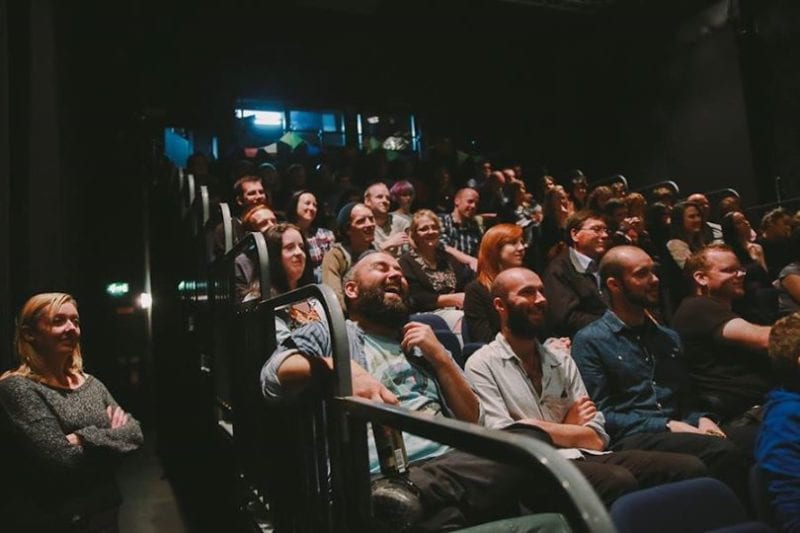 The most important factor in the night is the audience. We’ve been so lucky to have had such good audience attendances over the years, and it’s something we try to never take for granted. On a night, it’s the audience that can change a night from being good to great, or unforgettable. The energy they put in to their welcomes for the filmmakers, their laughs or emotional responses during films, and their applause at the end of the film is the variable of the night which dictates how good it is.
I sometimes say at the end of a great screening that although Galway has a fantastic artistic reputation (which is richly deserved), it doesn’t have that reputation by luck. It has it because of the work that the thousands of artistic people across the city and county put in. Organisations like Macnas, Galway Community Circus, Druid, the Theatre Room, Little Cinema and all the other countless organisations which are part of the fabric of what makes Galway what it is.
It’s the work of the filmmakers which keeps audiences coming to our nights. And it’s the very fact that there is an audience there for the filmmaker to screen their films to, is what gives them encouragement to keep on making films and keep on pushing themselves creatively and to better themselves and to learn from their contemporaries around them. 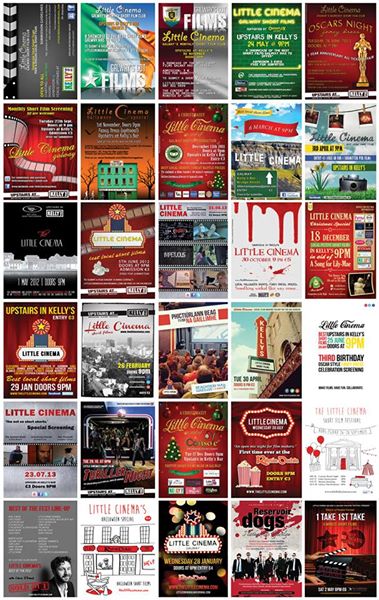 The next screening is on Wednesday 30th August in the Roisin Dubh. Doors are 9pm and entry is €5, all are welcome 🙂