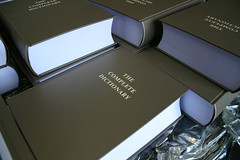 Photo owned by Fernando Wagner (cc)
I was explaining to my 10-year-old son how language is subject to constant change and new words are being coined all the time. He didn’t realise this before and was really taken with the idea. We decided to see if we could invent a word and have it enter common usage.
I left it up to him to come up with the word and it’s meaning. He chose meko, meaning cool. As it happens, MEKO is a registered trademark name for a family of warships, which he actually found pretty cool. We’ve been slipping it into casual conversation all day- he’s said it to a few friends and they haven’t batted an eyelid, so we’re expecting local results.
So next time you’re reaching for a superlative, say to describe the new Batman movie (which I really must get round to reviewing… I thought it was meko though), try meko. Just slip it in real casual like. See if it spreads. If you hear it back, let me know.
Here’s a story that’s a case in point. My friends’ 5-year-old was preceding everything he said with “dissum”. Each time he wanted your attention, he’d say dissum and then proceed to tell you his story. The kids and I were totally mystified about it and eventually I asked his dad what it meant.
“Seamus, what does dissum mean?”
“I don’t know, what is it?”
“It’s what Luan says at the start of every sentence.”
“Ah. He’s actually saying ‘can-I-tell-you-something’ but it comes out really fast.”
We use it all the time now. And this is the kid that made my kids a Vaseline Day card… and you should hear his variants on Chuck Norris gags… 😀