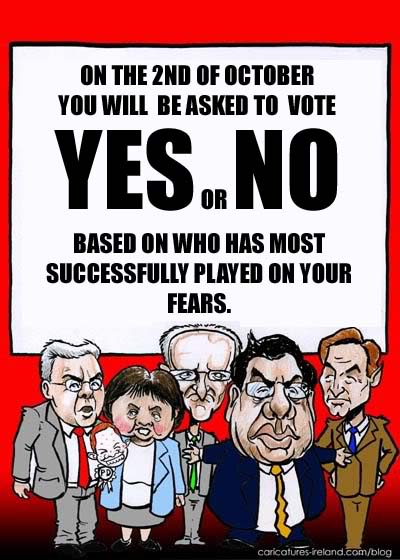 As seems par for the course these days both sides in the Lisbon debate made an absolute pig’s ear of it, basing campaigns on irrational fears and an aversion to facts as strong as a rabid dog’s aversion to water. Heart strings and purse strings have been pulled on by either side to the detriment of debate. Wages, job creation, economic recovery, abortion, euthanasia and the salty tears of children have all made their way onto a stage that is hazardously slippy with bullshit.
Europe being good for Ireland in the past does not create an entitlement for Europe to expect a docile Yes from Ireland. Nor would that make us less European. The treaty in the form of a European Constitution has been rejected by the French and Dutch.
Nor does a Yes vote pave the way for abortion, conscription, euthanasia, floods of immigrants and a minimum wage that’s lower than the dole. Anyone peddling these on your door should be distrusted.
Don’t accept poster slogans of either side at face value. Don’t vote based on NAMA or government dissatisfaction. Don’t let anyone confuse the issues of Lisbon and social policy in Ireland- that’s a very seperate debate, one that’s needed soon, but isn’t in this treaty. It’s not too late to inform yourself: the Referendum Commission has a dedicated website and Labour are answering any and all questions online today.
I don’t have any party affiliations nor do I seek to influence your decision. I want to remind you that a decision needs to be made and as a citizen it’s your obligation and your privilege to take part in the decision. Ireland’s a banana republic, corrupt at every level, but barring count fraud that corruption can’t touch the one bit of power left to us as Irish citizens.
The right to vote. Yes or No. You get to call it.