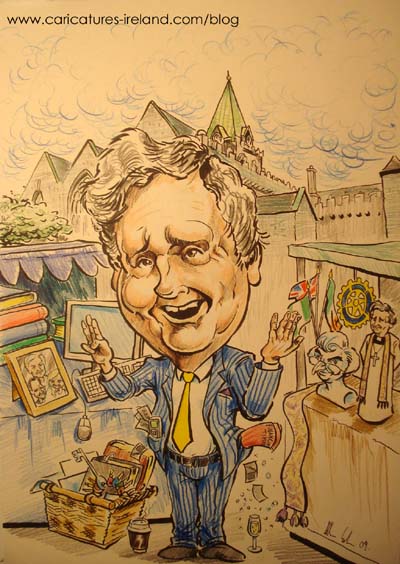 This is a retirement present I did for the Very Reverend Patrick Towers, Rector of St Nicholas’ Church Galway. He’s retiring as rector this month and this was a present from his parishioners. I’ve met Patrick a number of times over the years and he’s one of the most progressive people I’ve ever encountered. He famously invited the congregation of the Augustinian to St. Nicholas’ when their own church was being renovated, and I’ve heard there’s people that go to both the Augustinian and St.Nicholas’ services ever since.

Anyway, I got lots of photos of him from various sources, and there’s also quite a few nice ones online. There were lots of details of his indiosyncrasies that needed including, so the first stage was to work up a compostion and figure out where everything was to go.
Once that was done, I needed to work on a likeness. The handiest way to do this is to work up a series of thumbnails. I got a likeness I was happy with: 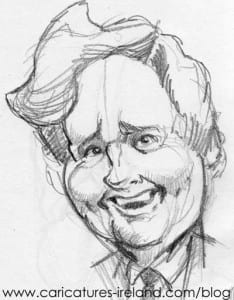 I then scanned the thumbnail and enlarged it to the size I needed and printed.
I found a good image of St Nicholas’ on Flickr, which I printed out. I covered the reverse of each printout with hard charcoal (it doesn’t smudge too easily) and fixed them to the paper I was working on. When I went over the likeness and the photograph with a pencil the images transferred onto the page nice and cleanly.
I then worked up the rest of the drawing in a soft pencil. Once the drawing was complete I went over it with black Pitt Pens and Uni Pin Fine Line pens. The final stage is adding colour, and I always use colouring pencils as they are clean and there’s no drying time.
There were a lot of details to add to this one so it took longer than normal: 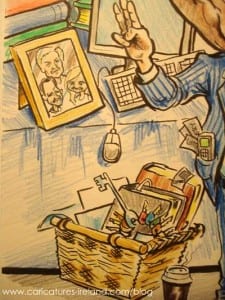 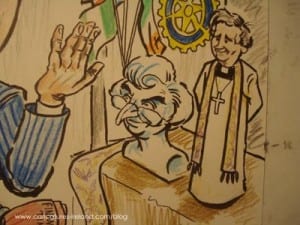 This is what my desk looked like during the process: 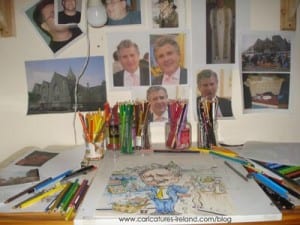 And the finished, framed piece: 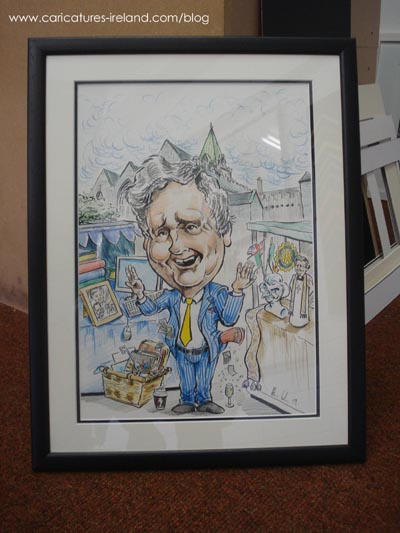 I wish Patrick the best of luck in the future. He’s talking about getting into politics. Great orator, brimming with charisma… he could go far!