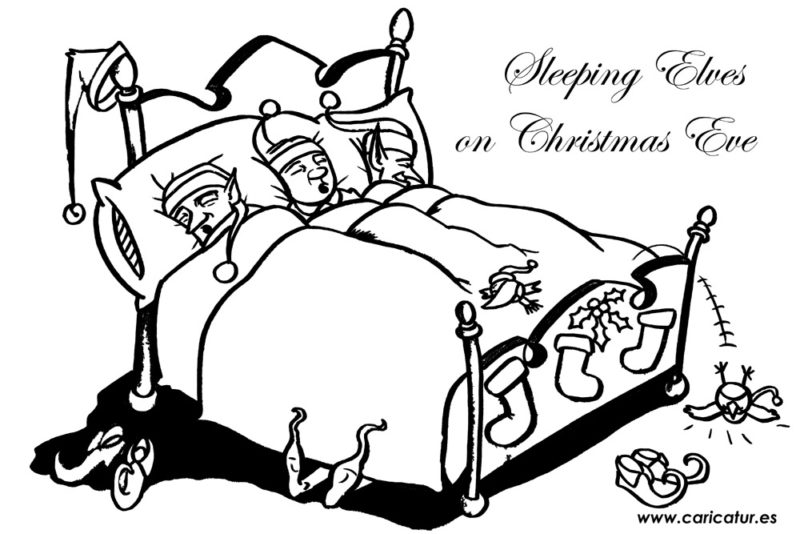 Christmas colouring pages: Santa’s Elves finally get to bed for a very, very long sleep on Christmas Eve after spending months making the toys for all the good girls and boys around the world. They set their alarms for June but some of the Elves like to have a bit of a lie-in, and will hit snooze on the alarm clock until July. Once they’ve seen Santa off on his Christmas Eve rounds, it’s time for a quick tidy-up of the workshops, make sure the recycling is out for collection, and then hit the sack. Some Elves are notorious snorers but most humans wouldn’t notice because they fall into such a deep, slow-breathing sleep, that a single snore takes 3 weeks to emit, and sounds to human ears like someone chopping tiny logs in the far distance. It causes a lot of distress to the more sensitive sleepers among the Elves, some of whom won’t drop off until New Year’s Eve with all the racket. Santa is very interested in materials technology and as soon as adequate soundproofing has been invented the snoring Elves will get their own special dormitory in the South Pole.

You can print this drawing of Santa’s sleeping elves for your little ones to colour. I suggest stripey pyjamas as I have it on good authority that’s an Elf’s favourite type of pyjamas. The little robins have been helping out in the whole endeavour too, checking in on boys and girls to make sure their behaviour gets them on Santa’s Nice List. Don’t forget to colour in the robins’ red breast.
Just save this image onto your computer or phone camera roll and then print it off on any connected printer.

Enjoy your colouring and Merry Christmas!