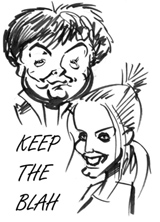 Today’s the day to email complaints@rte.ie over the change in format to Rick and Nikki’s shows on 2FM.

Take 2 minutes to tell RTE management what you think of the changes.

I’m writing to complain about the recent changes to the shows of Rick O’Shea and Nikki Hayes. The decision to axe the audience interaction, interviews and features has made each show nothing more than a mix tape. Your decision to do this has damaged your audience. Instead of being an engaged enthusiastic audience who felt part of the show, your remaining listeners are now passive and your shows have simply become background music. An engaged audience is more open to the message of your advertisers; to a passive audience those ads become indistinguishable from each other.

There’s simply no rationale that can convince me what you’ve done benefits these shows or 2FM. You have a duty to provide entertainment, and you took two very entertaining shows and turned them into iPods. You are going to lose audience numbers over this I am sure. It’s not too late to give the shows back their lustre; in fact if you did, 2FM management would be sure to regain the respect of the listeners.

I’m the person that set up the Facebook group in support of Nikki and Rick. As of today, that group has 327 members and is growing every day. A selection of the comments left by people are as follows:

” Rick’s banter was the only reason I listened to the radio rather than the CD player on the way home from work.”
“I can’t imagine a show without Nikki giving it a bit of lip! Keep the talk and stuff the music during the day if you know what’s good for ratings! Music is a night time thing anyway.”
“A step backwards if ever there was. The personality and the character are the reasons people tune in to specific shows. Listeners don’t want more ‘that was, this is’ linking droids which are plentiful enough on other stations. If people just want music then they will choose to listen to their choice, on their terms and in their time with their iPod, Streaming radio, LastFM, Imeem and that fella who plays the banjo at the end of Dun Laoghaire pier.
And there I was thinking Irish radio was actually beginning to get it…”
“Drop all non-music items? Are they serious? That’s beyond madness”

There are many, many comments being left on various blogs as well. There’s at least 30 influential bloggers who have come out in condemnation at this decision. This list too is growing every day. You can see the facebook group for yourselves, and I invite you read the various blog posts listed there to get an idea of how unpopular the change to format has been:

This has already been picked up by the Star and other papers are expressing interest in the story. Advertisers will pick up on the negative publicity and possibly go elsewhere. If you don’t want a PR disaster please change the shows back to their previous format.

6 thoughts on “I took 2 minutes for Rick and Nikki”