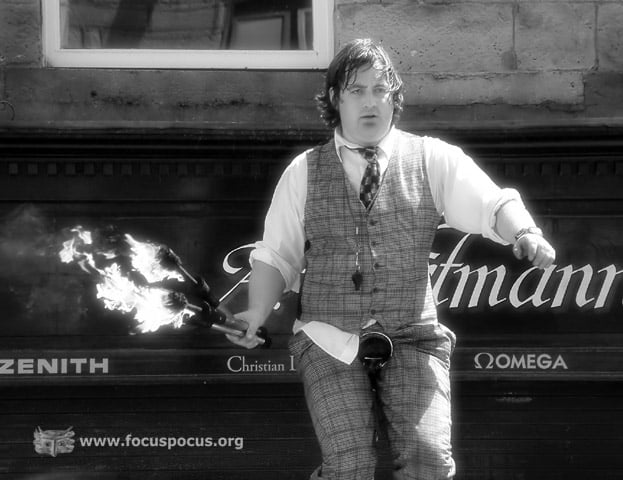 Johnny was never one of the best buskers. He was the best. If you had to walk down Shop Street on a summer’s evening you’d want to give yourself an extra half an hour for your journey. Johnny would have brought the street to a standstill.
I never caught up with him for that pint after he got back to Ireland from his travels. He was dead within a month of a quick chat in Easons. His funeral was one of the best day’s craic I ever had. The priest struggled to give a convincing eulogy as his inexperience with beds of nails showed. The congregation rippled with laughter and rippled with grief- we knew the enormous talent that had passed.
His mother invited about a million of us to stay for dinner in the hotel afterwards. She wouldn’t let a single one of us off without being fed.
Jay and I went up to her to express our condolences. We told her about his show and how important he was to the people of Galway, and the thousands of visitors he’d entertained over his short life. She nodded her head and held onto our arms as if we were the ones that needed comforting.
When we’d finished telling her about her amazing son and his amazing ability to capture an audience like no one else, she leaned in to both of us.
“Ah, you’re right. He was brilliant. But sure, you’ll be able to make a few pound yourself now he’s gone”.
The penny wobbled just long enough for her to make her exit, and when it dropped the two of us were crying laughing.
Perfect delivery and timing.

I wonder where he got it.

1 thought on “Johnny Massacre- I wonder where he got it.”