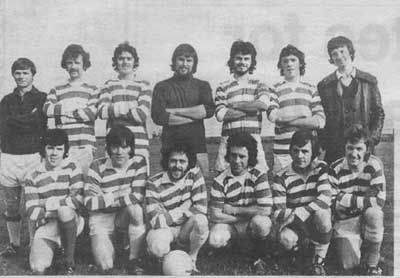 I was explaining to my dad how Google worked tonight, so by way of illustration I googled his name and got this page from MovilleInishowen.com. My dad had quite a reputation as a footballer in his youth playing for Moville Celtic (that’s him, 2nd from left in the front row), but was one of a number of local players that retired early due to family commitments (in his case getting married). In 1975 they got together to form the Moville Rejects and entered the Eamonn Gillen Memorial Cup. You can read the full story here.

In 2004 the team had a reunion. Apparently “Hubert Cavanagh team centre-forward in ’75 was a huge success as MC on the night”. That made me laugh. Football may have skipped this generation but a big part of my live caricatures is as raconteur with my sitters and the audience, so that seems to have caught!

This is the team as they appeared in ’04. Note my dad still has all his own hair. That, also, has skipped a generation. And well done on the Smithwicks Cup Dad! 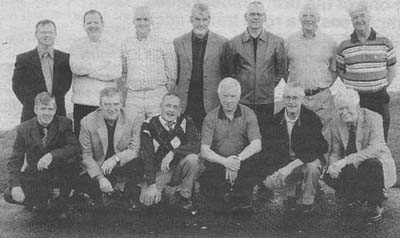