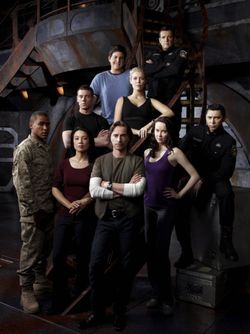 I don’t often comment on the passing of TV shows, simply because there hasn’t been much that’s caught my eye enough to deserve mention, but I’m genuinely annoyed at the cancellation of Stargate Universe announced today. I’ve been singing that show’s praises on Twitter a lot over the last few weeks. It was shaping up to be something amazing, the way DS9 was amazing.

SGU was a fresh, almost believable take on the mythos. It shrugged off the eyerolling “comedy” of the parent franchise and carefully established various plot threads that were starting to weave through each other. It was populated by believeable, not necessarily likeable characters, who all delivered a simultaneous sense of wonder and claustrophobia at their situation that was contagious.

And those set pieces. The life-saving spacewalk between the two ships Rush and Young had to make was one of the most beautifully constructed moments in television I’ve ever seen.

This is a dreadful shame, and my commiserations to the writers, cast and crew for the cancellation.

3 thoughts on “A few words on Stargate Universe being cancelled”