In 2020 I was commissioned by Kildare Street and University Club to illustrate an event in Stephen’s Green during the 1916 Easter Rising. Countess Constance Markievicz shot out one of the Club’s windows and the bullet embedded in one of the books on the bookshelf. The illustration would be a backdrop to the display of the bullet-bound book in the Club.

I did a number of pencil roughs that you can see below just to get things moving:

The client sent me an extract of a contemporary article detailing the scene in Stephen’s Green:
“The Irish Republic had been proclaimed around mid-day at the General Post Office and a detachment of the Irish Citizen Army under Constance Markievicz had occupied Stephen’s Green, digging trenches and erecting barricades on the street. Captain de Burgh Daly was in uniform looking out from the morning room on the first floor of the club. A bullet came through the window, missed him narrowly and lodged in a book. Also in the room was barrister Richard Best, a future judge in Northern Ireland.”

It was clear the illustration would require a montage from several angles to give the scene more drama and flavour as per the account above.

I did some research on the scene in Stephen’s Green at the time and the client sent me some photos of the outside of the building and the interior where the bullet hit. I also looked into Markievicz’s pistol and the relevant uniforms. I found this account in the National Library of Ireland’s collection:

“Mauser pistol handed to me by Countess Markievicz when she surrendered to me at the College of Surgeons Dublin in 1916 with Commandant Mallin. H. E. de C. Wheeler. This was presented to me by General Lowe.” Source

I have nothing but admiration for costume makers, prop makers, and designers involved in historical depictions for TV and film, I found it took a lot of work to get something even approximating historical accuracy, and that was just for one drawing!

I combined several elements and viewpoints for the montage and created a rough drawing for the client: 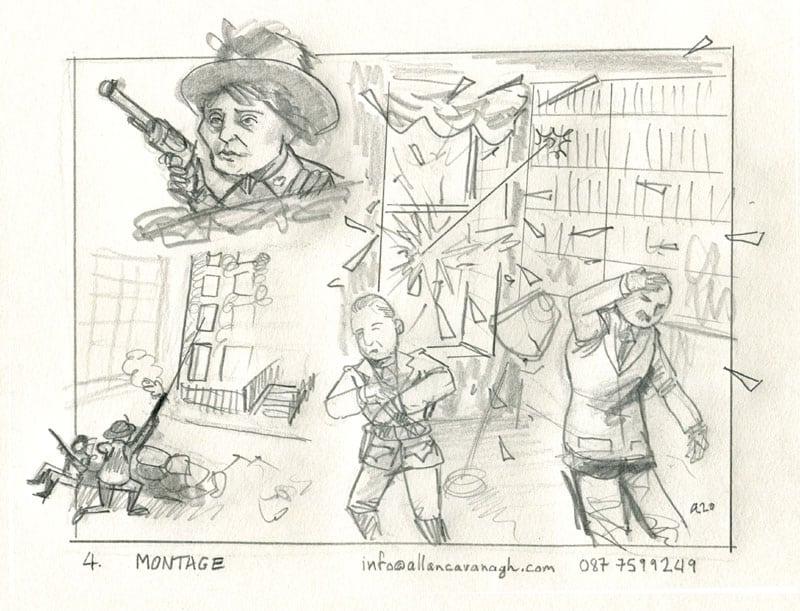 Once this layout was approved I moved on to the final 14″x7″ full-colour piece which emphasises the actual window that was shot and the part of the bookshelves that was hit by Countess Markievicz’s bullet.

(Thanks also to Dr. Niamh Puirséil for the research pointers when starting this project.)

I’m Allan Cavanagh and I have been professionally producing caricatures and cartoon art for over 20 years.