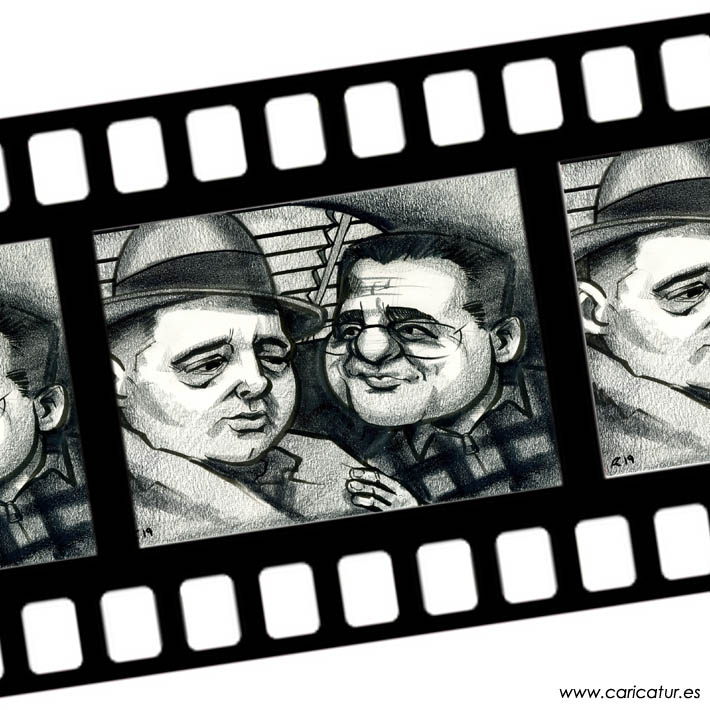 On the Waterfront film still featuring Rod Steiger but with Marlon Brando replaced by our heroic scribe Charlie Adley. This cartoon illustrated Charlie’s weekly column in July where inspired by Galway Film Fleadh Charlie lists his favourite films, including On the Waterfront:

“Let’s start in 1954 with Elia Kazan’s ‘On the Waterfront.’ Forget petulant Johnny in ‘The Wild One’ and his mumbling mafiosi parody in ‘The Godfather’: dockworker Terry Malloy is Marlon Brando’s finest role.

I’m way behind on posting my Double Vision cartoons after a very busy summer so you’ll see a bit of backlog clearing here over the next while! I really got a lot out of drawing this cartoon because I did a close study of the film still it comes from. Being black and white it’s a complete tonal study, so the way the lighting is set up in this scene becomes apparent as you draw and you realise what a subtle art film lighting is. It’s hard to consciously take in while you’re watching it but putting the film “on pause” like this reveals a lot about shot framing, composition, and how lighting can have a narrative effect. Look at how the shadow falls on Brando’s face here from the rim of Steiger’s hat here in the famous “I coulda been a contender” scene: 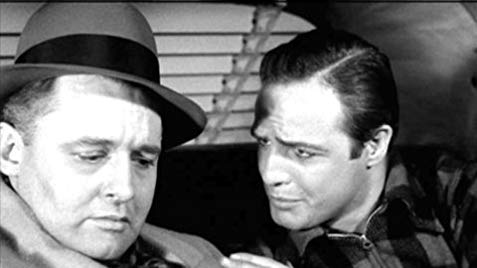 He’s literally casting a shadow on his brother in a scene where his actions in the past have cast a shadow on Terry’s very future. Very subtly it’s saying something about the power dynamic in the scene too. Given the millions of frames in a feature-length film it could be said a good film produces millions of masterfully-composed photos. Taking any one of them and studying it can reveal the hidden magic of the craft of film-making. You don’t see it at the time, but on some level, your brain does. Here is my version of the above still in full: 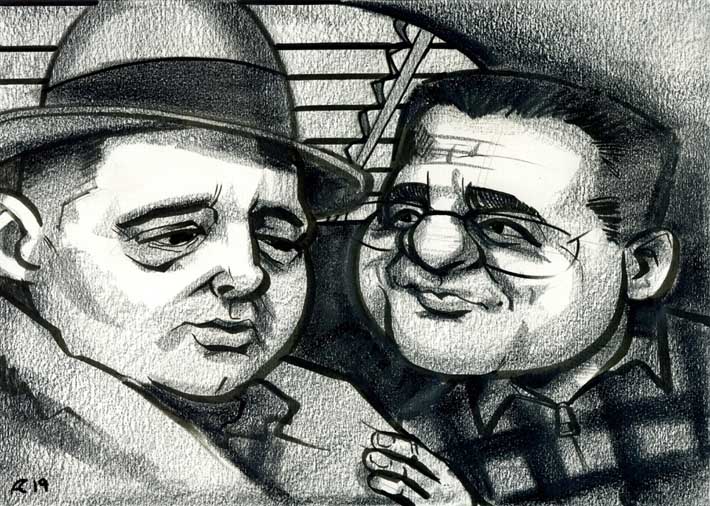 I tried to stick to the tonal values and composition of the original image as closely as possible and I think I pulled it off. I usually end up drawing the Double Vision cartoons on a Sunday morning over breakfast so it’s not the most academic setting! Coincidentally or not I did this cartoon a few weeks after seeing this masterpiece by C.F. Payne (which I now own thanks to a recent birthday, thank you Courtney!) based on a scene from To Kill a Mockingbird. Look at his attention to light and shadow while still creating an amazingly exaggerated caricature.

The other day “To Kill a Mockingbird” was on TCM. Frank Overton played Sheriff Heck Tate. Overton was a solid character actor who could hold his own in any role. Sadly, he died at 49 leaving one to wonder how many more could have been. “Mr. Finch, I may not be much, but I’m still sheriff of Macon County, and Bob Ewell fell on his knife”. #cfpayne #hartfordartschool #mfa @illustrationmfa @illustrationacademy @c.f._payne_documentary #illustration #hollywood #moviestar #characteractor #tokillamockingbird

Not entirely sure if the above embed is working so here’s a photo I took when it arrived (still can’t believe I own this!) If you’re interested in caricature art, baseball or cinema I really recommend you give his Instagram a follow, and buy stuff from his Etsy account! 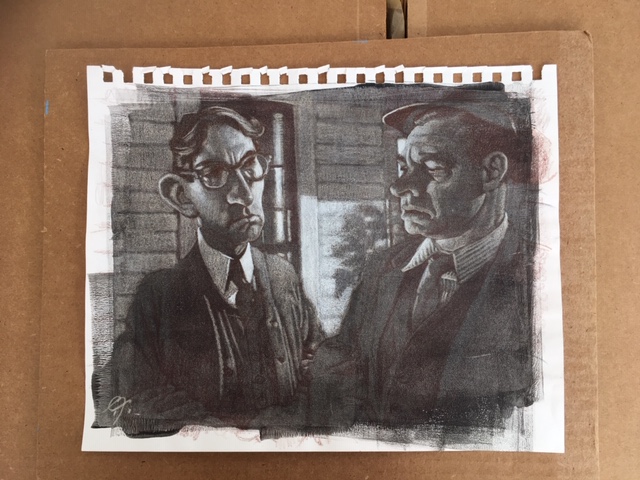