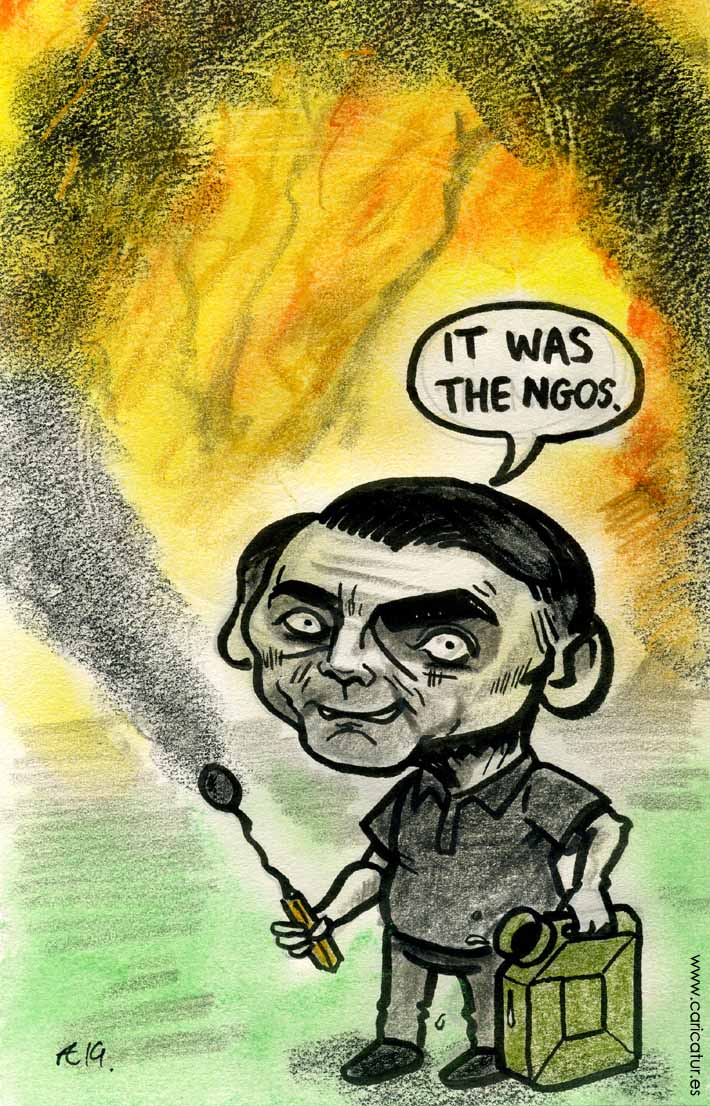 Bolsonaro and the Amazon rainforest fires.

Trump might have nukes but Bolsonaro has the lungs of the planet. 20% of our oxygen comes from the rainforest. Look at your kids. This is the world we’re going to leave them, a burnt out polluted husk, immolated in the name of capitalism. I don’t think I’ve ever been as scared in my life. All that talk about having 20 years to save the planet seems to have just upped the efforts to destroy it. Bolsonaro is unrepentant, blaming NGOs for what many suspect is deliberate arson to make way for farmland. This is the tragedy of the commons but with machine guns.

We’re completely fucked if this keeps up. Greenland said goodbye to a glacier that was reflecting the sun’s heat back into space and keeping freshwater locked up. The sea is rising and its salination is being diluted, which will cause a cascade extinction event for sealife. And then we start to starve. Instead of addressing this the likes of Bolsonaro and other prominent bigoted right-wing extremists just see it as a business opportunity, and this is replicated by the talking-parrot media (for example RTE wrote about the business opportunities of the lost glacier exposing previously covered oil, gas and minerals).

Bolsonaro declared war on the rights of indigenous people when elected and this literal scorched earth policy is another manifestation of this fascist scum’s early-days ethnic cleansing. More than 300 LGBT people were murdered in hate crimes in Brazil in 2018. If we keep electing “leaders” like Bolsonaro, Trump, Johnson, Salvini, Putin et al in fits of self-loathing xenophobic nationalism then we’re just slowly lowering the toaster into the bath. Our only hope is empathy, solidarity, equality, and reason, everything these fuckers despise. The atmosphere doesn’t have political boundaries. Sea levels don’t respect borders. Microplastics don’t care who you voted for. Carbon monoxide didn’t read your party’s manifesto.

Donate! Here are some charities compiled by Zelda Williams that are campaigning for rainforest protection, indigenous rights, education and replanting: