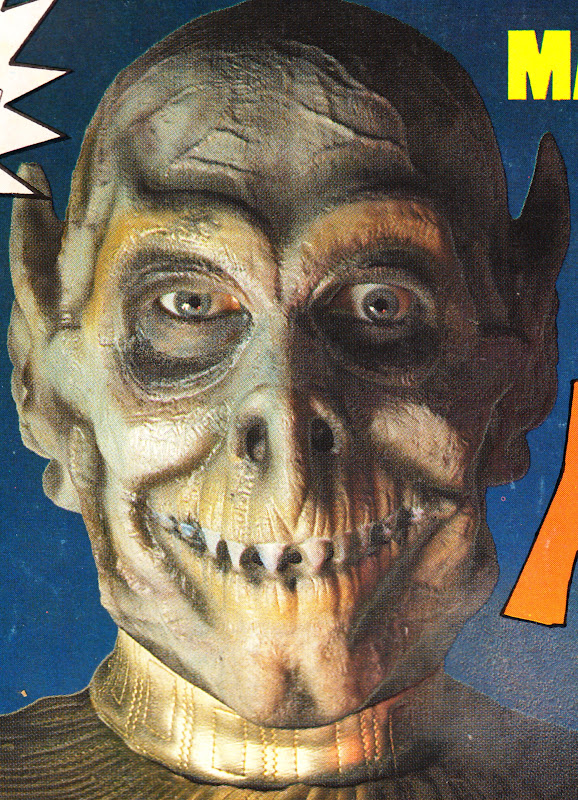 [SEE BELOW FOR AN IMPORTANT UPDATE ON THE MASK’S ORIGIN! 05/11/2020] One of my favourite comic strips as a child was Eagle’s Doomlord. There was something utterly terrifying about this eventually-benevolent alien sent here to judge humankind, especially in the eerie early photo-strip days. I had an impromptu interview/conversation with former Eagle Editor Barrie Tomlinson on Twitter and it threw up some unexpected trivia on the origins of the Doomlord mask.

Allan Cavanagh: The Doomlord mask was absolutely bowel-loosening and still gives me the heebie-jeebies. It was that he looked like he was smiling when killing people. Who made the mask?
Barrie Tomlinson: When we decided to do photo stories, two of us went into London’s West End, visiting theatrical suppliers and at one place we found the Doomlord mask. The rest, as they say, is history!
AC: You *found* it? As in it was mass-produced?
BT: Yes, it was just on sale in one of the shops. It seemed just what we wanted…and it was!
AC: That’s amazing. Was it touched up paint-wise after you bought it or was it as-is? Does it still exist?
BT: I think we used it just as it was, as far as I can remember. We had to darken in the actor’s eye area, as the eye holes were very large. I don’t know where it is now.
AC: That really worked, the whites of the eyes were so heightened and intense. Doomlord was my absolute favourite as a kid, I used to make the power ring out of paper and wear it around the house disintegrating my siblings.

So the Doomlord mask that gave me massive heebie-jeebies as a child was in fact a found object, commercially available at the time, and now possibly lost forever. Doomlord eventually became a completely drawn strip but that mask was the basis for this terrifying character’s whole look.

It’s perfect nerd excitement that 43-year-old me got to ask questions of the editor 10-year-old me wanted to know about Eagle’s Doomlord. As it happens, Eagle was my first paid gig.

AC: I love that today I can ask the editor of comics I read as a kid the sort of trivia I could have only dreamed of asking as a kid.
BT: It’s great I can still communicate with the readers!
AC: Pure escapism and like I told you before, the reason I do what I do now!

(Barry’s books Real Roy of the Rovers Stuff! : Roy’s True Story and Comic Book Hero : A Life with Britain’s Strip Legends are available now.
Doomlord: Deathlords of Nox is a restored collection of a major early Doomlord arc that synopsises the first 3 Doomlord photo stories.
Barrie Tomlinson on Twitter.
Another great follow if you’re interested in classic 70s and 80s IPC Magazines is GREAT NEWS FOR ALL READERS!)

This is gold. Also the Doomlord mask was absolutely bowel-loosening and still gives me the heebie-jeebies. It was that he looked like he was smiling when killing people. Who made the mask?

I was contacted today by a mask collector who informed me the Doomlord mask was actually manufactured in the 70s by a French vinyl mask maker called Cesar. The mask was called Danse Macabre and appeared in Cesar’s catalogue. Not only that, one exists in a private collection to this day! 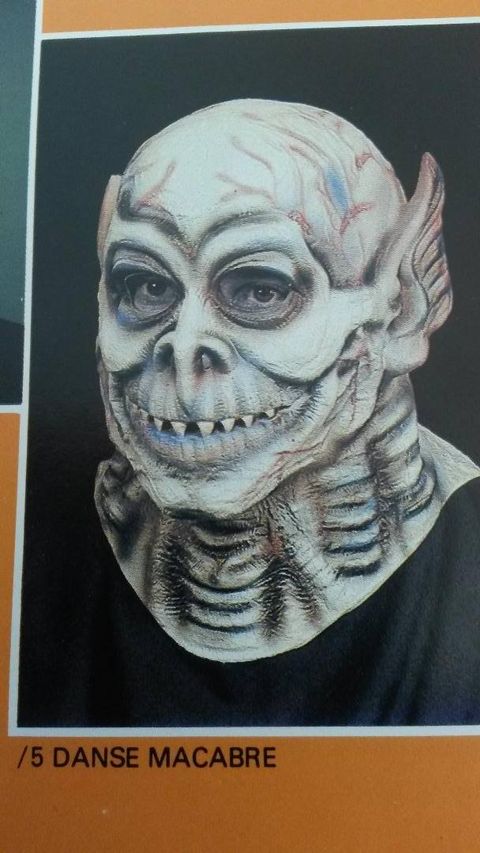 I shared this find on Twitter and was directed to another blog post that’s been around since April 2020, that takes an even deeper dive into Doomlord’s origins including his costume and who in fact went to buy the mask that fateful day:

However, for now, when it comes to Doomlord’s mask, we can reveal that there are slightly conflicting stories about its origin. Judge Dredd and Doomlord co-creator John Wagner distinctly remembers going to the West End with Eagle editor David Hunt to buy the mask, but his recollection is not entirely in conflict with the memories of designer Sue Moore, who remembers buying it from a shop near Seven Dials on behalf of the publisher.

Sue, perhaps best known for her work with fellow designer Stephen Mansfield on Doctor Who during the Sylvester McCoy era, quickly put paid to the “Don Post” mask report.

“It was just a generic cheap mask I bought in the West End,” she told documentary director and producer Kevin Davies (who, as an aside, researched heavily for an aborted TV documentary about Eagle and Dan Dare back in 1996).

“I have no idea what its lineage is [but] it was a manufactured mask. Nobody made it especially… I just sold them what I had. I had a meeting with the magazine and they liked what they saw.”

“I remember it was made of a very plasticised rubber,” Kevin recalls, “and inside it smelled sickly sweet.”

John Freeman’s blog has a potted history of when and where the mask was bought. Dr Who mask maker, Sue Mansfield was the one sent out with the task to buy it.https://t.co/RBGqIU5ZuP

Thanks to @SevitorOfNox for that tip!