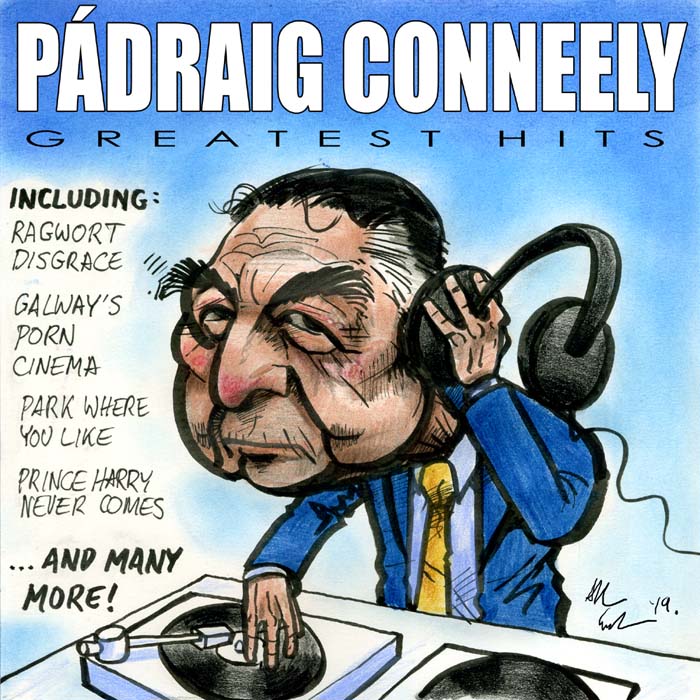 “Although others doubtless felt relief at the news of Pádraig Conneely’s retirement from politics, Double Vision lost one of its favourite foils. Over the last two decades, Podge and I have enjoyed gently upsetting each other.”


With a face that should be in a picture dictionary under bloviated, Pádraig Conneely was a regular in the column I used to illustrate in the Connacht Tribune, Double Vision. My recent post where I rounded up a few of the bauwld councillor’s appearances should attest to that. In a way though Conneely belongs now to a different era, in which physical column inches were the gold standard for how you were faring in local politics. There wasn’t a plastic bag in a bush that Pádraig Conneely wouldn’t turn up to have his photo taken with. He had a great nose for public morals too, finding and campaigning for the closure of Galway’s “Amsterdam-style” porn cinema. But like public displays of pornography the world has moved on, the print has shrunk to nearly nothing, and paper is refusing ink in the mismanaged world of print news. Pádraig snapchatting his latest ragwort find isn’t something that would ever have caught on. So as the pages of our local news sheets yellow and disintegrate at the departure of their burgundy masthead from local politics, this website wishes Pádraig well whatever harmless pursuits he will no doubt busy himself with. Now that the Galway City Council chamber is no longer his home, councillors will no longer have to bring tents and thermos flasks to Monday meetings, the Council will be able to slash its budget for broken gavels, and invasive plant species can set up home without appearing in daily press releases.

Mark this coming election time not with clocks or calendars, but by the fact that the type keys P,A,D,R,I,G,C,O,N,E,L,Y have broken, snapped and ceased.
More Double Vision cartoons here.