“This left Mourinho free at last to sit on the Red Throne of Manchester.

But lo, what was this fresh horror?

On the Blue Throne, ruling the other half of the same city, his nemesis, Pep Guardiola.”

That’s the prompt from Charlie’s latest column that resulted in the above cartoon of football managers Pep Guardiola, José Mourinho, and Jürgen Klopp of Manchester City, Manchester United, and Liverpool FC respectively. I’m not a sports fan but I’d watch this show. Maybe football needs more dragons and zombies. White Walkers FC managed by the Night King versus Jon Snow’s Night Watch FC in the stadium at King’s Landing.


I took a wee element from each of the badges/shields/logos of each team in this cartoon: the red rose of Lancashire from Manchester City’s crest (fitting given that Game of Thrones is based in Part on the War of the Roses), the devil’s trident/pitchfork from the Manchester United crest, and the eternal flame motif from the Liverpool FC crest, which I learned was added as a memorial to the victims of the Hillsborough disaster.

I’ve been told by a taxi driver in the past I look like Pep Guardiola (I was wearing a suit at the time). Apart from the shaved head and the beard I don’t see the resemblance myself. However a German man insisted on having his photo taken with me at a gig in Dublin 2 years ago saying I looked like him so maybe there’s something in it! 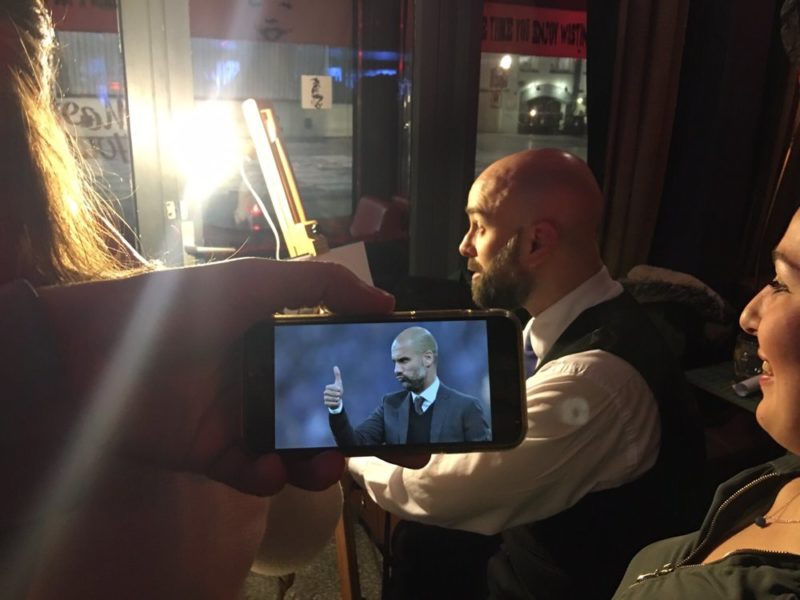