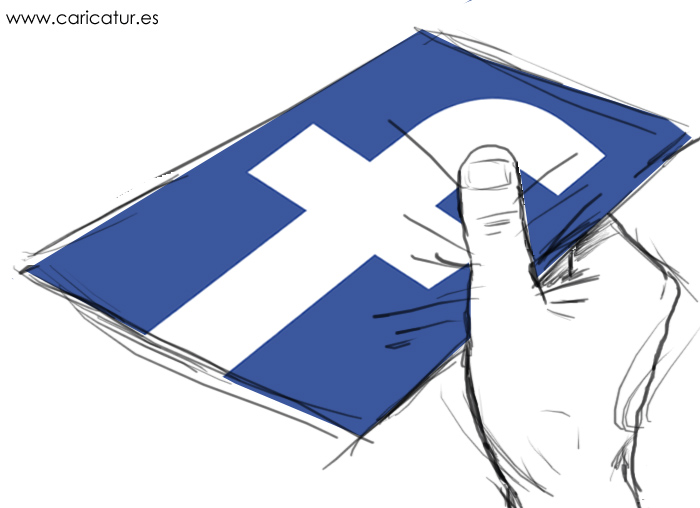 I’ve seen so many social media posts across various platforms recently about deleted content (usually to do with nudity or exposed nipples. Pathetic). It’s not a new problem but for many it’s their first time encountering it: if you don’t own the platform you’re showcasing on, the decision of what happens your content there is out of your hands. If you have a Facebook page, an Instagram profile or other social media platform, and you don’t have your own website, the platform is your landlord: you are entrusting that your dodgy right-wing nipple-fearing landlord isn’t going to shut you down and kick you out.

How The Internet Used To Work

There was a time the only real online platforms creative people like artists, musicians and indeed writers had were their own websites. Back in the dawn of time this consisted of 1-5 or so static pages with low resolution images and a few contact details. Then the discovery of fire came with the so-called web 2.0. This allowed for sequential publishing of news articles, or weblogs (yes, stay with me now, that’s right that’s where “blogging” came from). Many of these were not self-hosted but were hosted on 3rd party platforms like Blogger and WordPress but were relatively stable, with a sense of ownership, and importantly, decentralised. They had comments fields under each blogpost, which allowed a rich community to interact on each other’s platforms. That’s correct, in those days you not only read the comments but interacted with them. Another important aspect of blogging was the RSS feed. This was a blog’s content stripped of style information and made it very easy to follow all your favourite blogs in one place such as Reader (RIP). RSS stands for Really Simple Syndication, and it really was simple. It still is, and I recommend reading your favourite sites in chronological order using something like feedly instead of waiting for them to turn up in your Facebook feed.

At one point I was subscribed to a few hundred different blogs. If you read something you wanted to respond to you’d click the link to the original post and then praise or have a go in the comments. It was a sort of joyously simple time when people looked for confirmation of stories from at least 2 sources rather than a meme on your Nan’s Facebook. Facebook came along and through sheer popularity seemed the better prospect, allowing centralised interactions and content dispersal. Very soon the self-correcting standards that were in place of the blogging ecosystem fell apart and we entered the terrifying shitshow we’re in now. Facebook was about amplification not verification, and amplification was addictive.
Not far behind came the comments field killer Twitter. Busy blogs fell silent as more and more people took on an @ handle and centralised the conversation in 140 characters. Blog posts were still happening but crucially the chat was occurring on someone else’s porch. Perhaps as a spillover from the etiquette that had been cultivated from blogging, Twitter was quite pleasant for a long time, even as we were tricked into boarding a bus for the post-show chat and driving away from the theatre before we could buy the souvenir programme there. Over time the etiquette crumbled there too as more and more users joined, and discovered that again, amplification was all that “mattered”.

Where We Are Now

Before I digress too far in this “I remember this was all fields” fashion, let me get back to the point. Facebook and Twitter were fast becoming the only shows in town. They became the norm, but crucially, Facebook and Twitter (and later Instagram) did not want to be simply another website on the internet. They wanted to be people’s entire experience of the internet. They were walled gardens that didn’t want you straying outside so they kept building the walls higher. Soon they (and their ilk) were accepted as the only shows in town. Many creative people were using social media platforms in a way they would have been using their own site a few years previously. Instead of investing in their own corner of the internet they were giving away everything for free to what are essentially, just other sites on the internet.

Why This Is A Mistake

As I said at the start of this post, many professionally creative people are finding their content is simply being shut down by the third party platform they’re using if that third party develops a problem with their content. Where does that leave them? Without a means to display and sell and make a living. That to me is an untenable position to be in.
If you’ve been doing this you need to reimagine the pecking order of priorities for your online presence. Social media has a powerful reach but that’s not the end of the story, that’s only the beginning. Facebook, Twitter, Instagram, Pinterest, et al, are simply leaflets. Think of them as something you’d hand out on a high street to raise awareness of your ACTUAL PREMISES.

Here’s how I put it in a Twitter rant recently (oh the ironing): 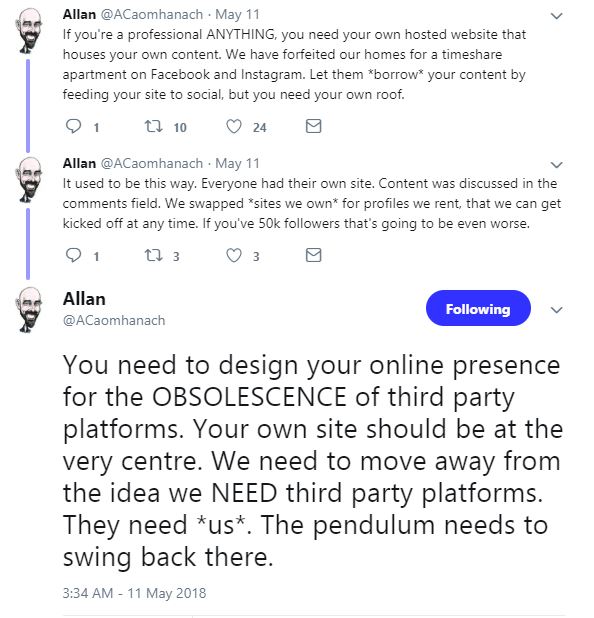 “If you’re a professional ANYTHING, you need your own hosted website that houses your own content. We have forfeited our homes for a timeshare apartment on Facebook and Instagram. Let them *borrow* your content by feeding your site to social, but you need your own roof.

It used to be this way. Everyone had their own site. Content was discussed in the comments field. We swapped *sites we own* for profiles we rent, that we can get kicked off at any time. If you’ve 50k followers that’s going to be even worse.

Your own hosted website is your shop front. Stop relying on free third party sites. Buy your domain name and set up a hosted site. Put your own stuff there first, whether it’s photography, painting, writing, modelling. Stop giving these massive companies who own the third party platforms your stuff for free. They should be paying us to post our stuff on their platforms because they make billions from it. You want the footfall in your own shop, not to be directing it elsewhere. You can of course keep using social media platforms to this end, by being clever and using the stuff you post there sparingly and incentivising traffic from there to your own site.
This blog is hosted by Blacknight and is published using WordPress. Both of these things are very easily set up. You can get this going for less than €100 per year. You can do it yourself. If you want to make a business of it, spend money on it. Don’t shy away from spending because social media is “free”. YOU’RE THE PRODUCT.

I post everything here first, with a trickle off to third party apps (Facebook, Twitter, Pinterest, LinkedIn, the soon to expire Google+). Some stuff gets posted automatically using a plugin, some stuff I post manually. I’m still playing around with it. I use these to try to drive traffic back here. What’s the point of posting my stuff on Facebook if everyone admires it over there and never ventures beyond it? There isn’t one. What if Facebook takes a dislike to me and simply kills my FB page with 1000s of fans that I’ve come to rely on? What if Facebook changes the algorithm? I’m screwed. Don’t rely on it.

UPDATE 30/01/21: I’ve started using the free version of Blog2Social. In one click I can publish my posts to LinkedIn, Twitter, Facebook Page, Flickr, Pinterest AND Instagram. Instagram in particular is a fiddly pain the proverbial if you’re posting regularly, as you can’t upload directly to the Instagram site from a desktop computer, you have to use the app. It’s too time consuming. I have quite a backlog of work I’ve not yet posted on my Caricatures Ireland blog so I’m to disciplining myself to publish 6 posts a week, and they’re then going out over my socials. I have had a big jump in leads in what is normally the barren month of January.

Look at optimising your own content for search engines. Google is attempting to become its own walled garden, serving content more and more from its SERPs (search engine results page). Get your site verified and start using the search tools and Google for Business to start appearing more in search. Be wary about becoming too reliant on Google though, in the spirit of this blogpost!

If you’re a creative person looking to sell your stuff online, or generate leads (old fashioned phone calls or emails) please please get yourself a website and prioritise making it visible. Do not rely on social media, it will simply bite you in the ass. When the next big thing comes along, get in early, get as much out of it as you can, and be ready to move on. Always have your own base of operations, your own corner of the internet, your own website.

(Blacknight has a blogpost on a similar theme here. I’m not affiliated with BK other than being a customer and a fan.)