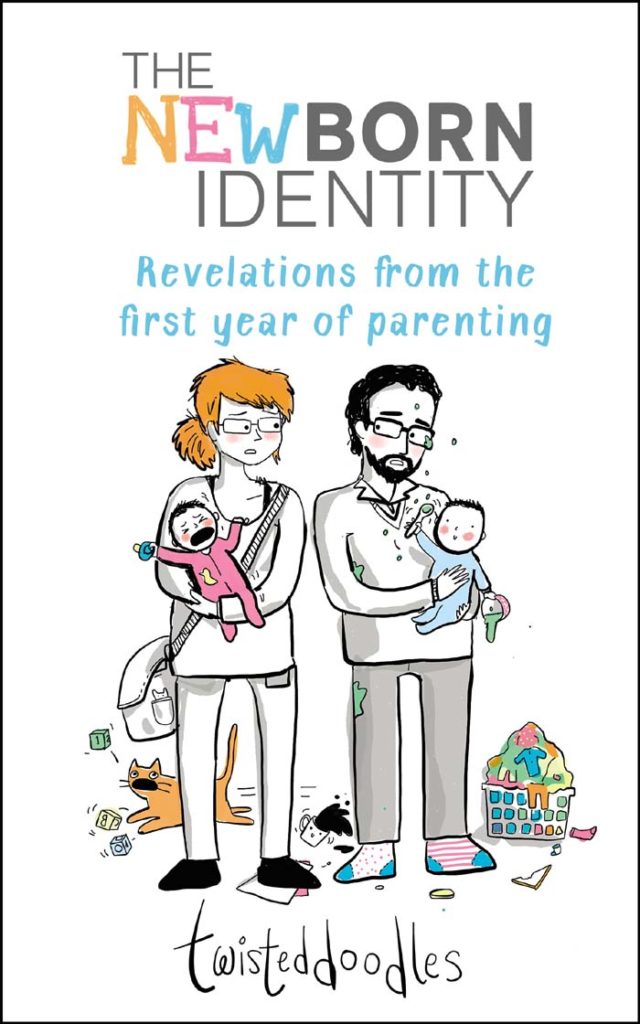 The Newborn Identity by twisteddoodles: phenomenally prolific cartoonist and friend of Galway Cartoon Festival Maria Boyle, aka twisteddoodles, has written a book. She has somehow managed to write a book about rearing twins while simultaneously rearing twins. It’s a joyous and poignant reminiscence through Maria’s first year of motherhood, interspersed with her wry cartoon takes on the subject.

The Newborn Identity has a diary form and we chart the days with Maria page-to-page. As a new parent it can seem like an hour is a day when baby’s awake, and 2 hours pass like 5 minutes when baby’s sleeping. Maria charts the stages from pregnancy to the twins toddling at 11 months old, including how to respond to parenting forums, social life and lack thereof, the lurgies brought back from childcare, to fashion tips like how to make a virtue of colouredy food splodges on clothes.

A parent should read this book for the worthwhile laughter of recognition. The short staccato diary form will lend itself well to the snatched 5 minutes of me-time that first year of parenthood occasionally allows.

Let’s be clear: Maria is probably our best cartoonist working today, with an instantly recognisable style even when her signature has been clipped off her own work on some stupid meme page on Facebook. She has carved out a niche for herself despite a media world where the cartoon has a somewhat diminished value. All of this and she’s a respected scientist too!  I’m not just saying that out of some bias because she’s a Donegal woman: her work has appeared in Buzzfeed, The Guardian, Huffington Post and more. She’s a cartoonists’ cartoonist.  It was our pleasure to host some of Maria’s work in last year’s Galway Cartoon Festival and we look forward to seeing much more of her work in the coming years.

The Newborn Identity by twisteddoodles is published by Transworld Ireland in Hardback, €14.99
Buy it from Easons here.
Get it from Amazon here: