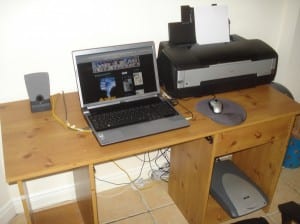 Round about this time last year I bought a Dell Studio 1735. On the experience of that purchase I’ll never buy Dell again: this badly designed, unresponsive piece of plastic has expunged me of any trust in any other Dell products.

Firstly, the keyboard has the most dreadful action of any keys I’ve ever pressed, including toy mobile phones from a Two Euro shop. It squashes down in the middle when you’re typing, and it’s got the clackiest keys, sounding like the spokes of a BMX bike in the 80s. Recently the F4 key just popped off the board. I secured it again, but I use secured in the same sense that the Beverly Hillbillies “secured” their belongings on the back of their car.
Some designer decided that the touch sensitive controls for DVD playback should be invisible too. They do become visible once they’ve been touched, but if you want to adjust your volume using them you must first run your finger along where you think they are so that some will light up, and you can remember the one you want once you’ve closed the DVD programme that springs open even if you just brush of that part of the keyboard.
The soundcard is dreadful. Sound playback even on external speakers clicks and hisses the whole way through. If I want clear playback I’ve to use a USB soundcard, then it works fine, but I shouldn’t have to shell out more money for something that should work in the first place.

It came with Vista installed, which isn’t really a hardware issue, but the whole thing packs up if I try to use data CDs and has to be rebooted, and then I have to eject the disc before Vista boots fully. I put this down to shitty Vista conspiring with shitty hardware.
The touchpad is about as sensitive as bark on a tree that died from an overdose of anaesthetic. For some reason it’s set off to the left rather than being placed neutrally in the middle. You might think this would be to the exclusion of left handed people, but no, it would be a more comfortable experience for a lefty; right handed users will find it takes a lot of getting used to, at least, once the cramps have passed.
No, I never returned it to Dell. The reason is the same one that most people would have: I had to buy a new computer because the old one packed up, and once I had it, I had no window in my work schedule to send it off for in indefinite period for repair.

Or to put it simply, you can’t repair bad design.
UPDATE: looks like Pat’s having Dell problems too.
UPDATE 15/03/10: Now the screen’s getting loose and shaking. The volume control lights flash on and off after Vista updates. What a piece of crap.

1 thought on “Thinking of buying a laptop? Steer clear of Dell Studios.”