[This is a review I wrote of Irish horror sci-fi comedy Grabbers in 2012 for the now-defunct ramp.ie. As it’s no longer online I thought I’d give it a new home here on my own site.]

The phrase ‘low budget Irish horror film’ is one that will be immediately associated with Grabbers. This is unfortunate as it has certain negative connotations, probably recalling Cormanesque scenes of actors freezing their nuts off on a Saturday morning in a tax-incentivised industrial unit while the crew desperately try to round up the rats that have escaped the set and run off to start new lives in the Connemara countryside. There should be no such negative associations with Grabbers. This is a film that denies its budget, its timeframe, and its every constraint frame by frame: it’s an outstanding piece of work.


Grabbers tells the tale of an extraterrestrial siege of a small island community somewhere in Ireland. Straight-laced and by-the-book Garda Lisa Nolan (Ruth Bradley) moves to the island from Dublin for a bit of on-duty rest and recreation and immediately knocks heads with drunken and depressed local Guard Ciarán O’Shea (Richard Coyle). There is of course a simmering tension between them that we hope turns into a romance that keeps a back seat because we know how bloody romances can get in the way of where we want a film to go, but we still like to see people hook up don’t you know. 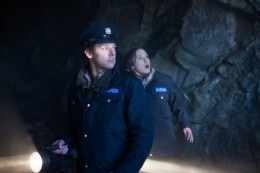 It opens with a splendidly breathtaking effects shot that probably cost a quarter of Michael Bay’s coffee budget on a Transformers movie. Which is a lot of fucking money. We see something splash down in the Celtic Sea from space. It is simple, and utterly beautiful, and immediately gives the film an epic scale, and a delicious tension. This film has an unrelenting energy about it, quickly established in the next scene where the unfortunate crew of a fishing boat meet a squelchy demise as the whateverthehellthatisohmygoddidyouseethat discusses fishing quotas in the most terminal fashion with them.


This film has so many nods to its lineage you could play horror bingo with it. It’s respectful, never cloying, while maintaining a character and freshness all of its own. It has an eye for landscape in the same way Trollhunter does, and that painterly regard for scenery was one of the aspects that made Trollhunter such a joy to watch. Grabbers treats the Inishowen locations with a nuanced eye, giving what is a ridiculous premise a visceral geographical hook that firmly snags the audience. It’s also shot in part outside the pub I used to drink in in Moville.

There’s a few well-established tropes that should rankle, but don’t. One of these is the drinking. Why don’t we feature drinking in an Irish-set film? Yep, it’s there, but you know what? It’s funny, and it works really well, serving up some great gags, because this is a film that’s aware of its constituent parts, and effectively turns to the audience and winks at several junctures, and you feel good at it sharing the joke with you. It also becomes a plot point. Plus you’re probably going to the fucking pub when it’s over anyway so shut up.

The setting of Erin Island serves up an Ireland that’s really a confectionery Ireland sweetened for an international audience. The specificity of place we might expect from a film that so lovingly serves up its Donegal locations on the screen isn’t there. I can accept this is a necessity of trying to give the film a more international appeal but it would have been nice to see the it dig its heels in and be a film with a specific setting in a specific community. It’s a minor quibble though and not one to get hung up on. 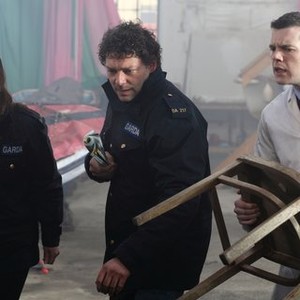 The effects are outstanding. Don’t expect the ‘necessity is the mother of invention’ alien action to be taking place off screen: a very weighty, agile, tentacley horror gets plenty of fear-inducing screen time, and there are some Really Good Deaths (you know, the ones you remember a long time after the film). The direction and pacing are wonderful, there’s a confident storytelling in the images as well as the narrative, the performances are solid with a great gallery of characters, there’s a jester’s arsenal of slapstick, and some killer one-liners (we’ll ignore the obvious question of where all the children went and assume there was some kind of summer camp away from the island). Grabbers isn’t perfect, but it deserves to do massive business on its national release because it’s beautiful, tense, scary, and bloody hilarious.
Own it on blu-ray: