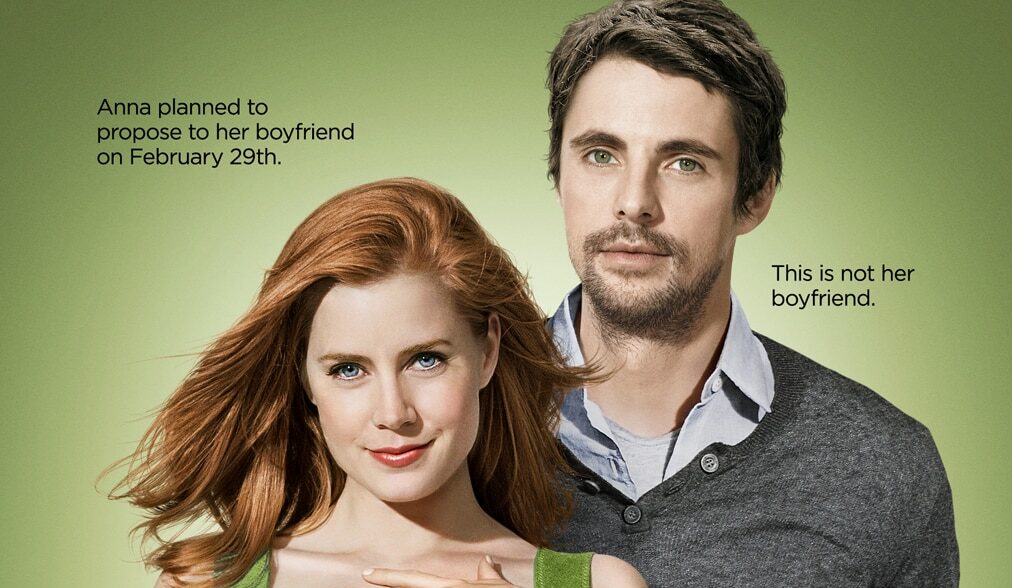 [This Leap Year movie review first appeared on the sadly now-defunct Culch.ie in 2010. It was the most read thing I’ve ever written and so I’ve decided to give it a new home here on my own site. Strong language from here on! Culch.ie RIP]

It’s easy to write Leap Year off as another inbred descendent of The Quiet Man. First appearances are of a film full of twinkly-eyed drunken charmers with secret pasts and promiscuous fists having twinkly eyed drunken fights over promiscuous pasts in secret fields. However, this mere shillelagh shop window dressing hides a more sophisticated cloth cap of time travel and love and – begorrah, no it doesn’t.

Anna is desperately trying to get to Dublin to propose to her cardiologist boyfriend (to give him her heart, see?) on Leap Day, which is Monday 29th February in the film. The last time 29th February was on a Monday was 1988. Is Anna intending to travel back in time as well as cross the Atlantic? It would certainly put the depictions of Ireland in context. There’s no doubt where the film is headed when Anna boards the plane. She’s seated beside a twinkly eyed priest, played by the baddie from Ros na Rún, who looks about as comfortable as Harrison Ford must feel when he sits down to shoot a Japanese whisky commercial.
(Further evidence of the time travel thesis: Quantum Leap, a show about time travel, has the word Leap in the title. The main protagonist of that show is called Samuel Beckett. Samuel Beckett is the name of a drunken, twinkly eyed Irish playwright. Anna goes to Ireland. Ergo, time travel. Also, She’s travelling back in time to 1988. CIE was rebranded in 1988. There is an Irish Rail train in the film. Coincidence? I think not).

The plane hits bad weather before it reaches Dublin and has to make an emergency landing in “Cardiff, Wales” because Cork, Shannon and Belfast must have been choc-a-fucking-block with American chicks arriving looking for love. The oxygen masks fall from the roof, demonstrating that the cabin crew are every bit as shit as the pilot: not a single passenger puts one on. The airline is called Gaelic Air, and has obviously since ceased trading. That or Aer Lingus were too tight to stump up for the product placement.

Stranded in Cardiff the intrepid/stupid Anna hires a boat to take her to Cork, a journey of 370km or so. Cardiff to Dublin by sea is around 400km. Obviously the Irish Sea and the entire eastern coast of Ireland was too chock-a-fucking-block with American chicks looking for love for the boat to dock. However, the weather is so bad the ship’s pilot can’t berth in Cork, so he decides on Dingle instead. You know, on the weather-beaten, dangerous Atlantic coast. Much safer. And only 620km from Cardiff by sea.

After dropping Anna off on a beach (why would you bother using the pier in Dingle?) the boat heads off again, presumably back to Cardiff (1240km round trip). Don’t worry about all that bad Cork weather though, he probably went up around Ulster to avoid it. Dingle has obviously shrunk in the rain, all Anna can find is a little pub where the cast of Killinaskully are on holidays. She meets Declan. Declan has a brain disease that affects his speech, because that is not an Irish accent.

After Anna’s American technology proves incompatible with backwards Irish electricity and a night in which she manages to trash her room with her arse, Declan agrees to taxi her to Dublin for some of her American wealth. The wily bastard just drives her around the Dingle peninsula for the morning. I’ve worked this out by the complete lack of any driving on anything that looks like the N86 that would get you to Tralee in about 20 minutes from Dingle where you can get any amount of buses or trains to Dublin. Then they meet some cows and Anna manages to destroy the parked car in a scene notable for its lack of hilarity.

There is much walking around and talk about suitcases. Declan totally perves on her arse as he falls behind her. Then Anna’s suitcase is stolen by men in a van. Vans play baddies in this film, appearing like Godfathers that belch forth henchmen at several junctures. Declan’s promicuous fists get an outing on this gang shortly thereafter, and they end up really sorry for trying on Anna’s bras on their heads.

They make it on foot to a tiny train station in Tipperary. Dingle to the Tipperary border on foot would take around 15 hours without stopping, so clearly Anna can add teleportation to her list of incredible powers. I know that begs the question of why she doesn’t just teleport to fucking Dublin, but shut up right?

There just happens to be a massive CGI castle up a big CGI hill behind the tiny train station, so Anna and Declan decide to prick around up there instead of waiting for the only train. There’s some shite about Diarmuid and Grainne, and Anna gets wet in her knickers a bit. And what do you know, the train comes early and she’s so slippery in her knickers that she slips on the way down the hill and ends up all covered in clingy wet mud and stranded again.

But never fear, the station master takes them home to the best B&B in Ireland which he and his wife run. Declan has skillfully avoided any towns or villages and is rewarded with a good view of naked Anna through the shower curtain. We are thankfully spared the sight of him jerking off but we know it happens. All that jerking off leaves Declan hungry and murderous, so he offers to cook the dinner. He and Anna go to the shop no they don’t they go to the garden and pick ALL the ingredients for dinner and Declan chokes the chicken.

No, he really chokes the chicken.

The next morning they set off and Declan again manages to avoid any human settlement until they’re half murdered by hailstones, which, judging by Anna’s surprise, they musn’t have in Boston. They take shelter by crashing a wedding and, this being Ireland, where we have to act like we’re the most welcoming fucking people in the world when there’s an American about, they get to stay for the reception and the afters. This is all in a marquee by a lake next to a church in the middle of nowhere. What a coincidence!

Hey, it must be time for Anna to gain a superpower. This time, she can defy physics and make objects gain momentum when thrown from her foot. She manages to concuss the bride when one of her shoes flies off during a dance. It’s a brilliant aim, she gets her right between the eyes. Also, we’re starting to believe Anna’s heart’s not really in this marriage thing any more as she hasn’t bothered her hole to contact her boyfriend in 2 days to let him know she’s still safely defying the laws of physics.

Anna gets pissed on vodka by the lake after they get kicked out of the wedding and passes out. Then Declan obviously gets a crafty taxi because suddenly it’s Monday morning and they’ve slept the night on a bench IN A TOWN! And they get a bus! To Dublin! After 2 days! They should have frozen to death but let’s not quibble at this stage!

Now, I thought I’d be spared any further insult at this point. I thought they couldn’t do much harm in Dublin. I thought they’d just get lots of establishing shots of Dublin landmarks, and it really looked like that for a time. They prick around Stephen’s Green, which appears to think it’s June, what with the leafy trees and flowers everywhere. Then Declan, being a backwards Kerryman with no mobile phone, needs to make a phonecall. In the middle of Dublin. In one of these: 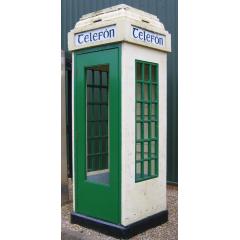 Now I’m not going to tell you how this ends. I wouldn’t want to spoil it for you. But it’s not the gay sex/ threesome ending I was expecting.
Ah fuck it I am going to tell you: Anna gives into her Stockholm Syndrome, drops her whole life in Boston and returns to the pub in “Dingle”, which seems to be the only place left to get anything to eat in Ireland judging by how busy it now is. Declan pricks about with Anna, she gets upset and teleports to Dun Aengus on Inis Mór, he teleports after her and asks her to marry him. She says yes and R2D2 and C-3PO turn up to watch them dangerously consummate their love right on the edge of the cliff.

If the writers of this film (Simon Beaufoy, Harry Elfont and Deborah Kaplan) had bothered to get out a map and set this in Ireland the script would have been serviceable enough to make a mild, harmless romantic comedy. But the diddley-iddley fuckwittery of setting and the sheep’s raisons that fall from the sawdust-filled characters’ mouths maim it. However it is the performance of Matthew Goode that nails the coffin shut, lowers it in the ground and makes sandwiches for the bereaved. I’m so offended by his performance I’m petitioning my local TD to pass the Matthew Goode Bill that will make it illegal for him to ever set foot here again.

And if you’re wondering why I went to see it, well, Emer wanted to see it. I did it for love.