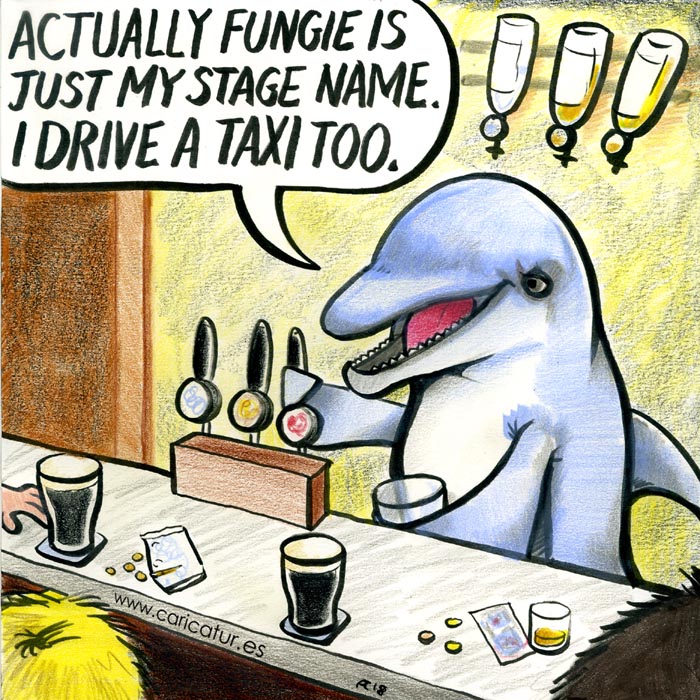 
Fungie Dolphin Cartoon: this is one of my pieces I’m exhibiting in the Galway Cartoon Festival starting this Saturday, and it’s for sale! This cartoon of Fungie the Dolphin, Dingle Co. Kerry’s most famous resident, illustrates Charlie Adley’s latest column over on Double Vision:

“Next morning I drive past a place in Dingle called ‘Dolphin Booking Office’.
Is that the place where dolphins go to book a swim with humans?”

Do you like this cartoon of Dingle’s Fungie the Dolphin? Is someone close to you missing the pubs of Kerry? You can order this framed print for just €60 including delivery!

Want more great cartoons in your inbox? Subscribe below!

I had a quick google for Fungie and the related searches make interesting reading:

is fungie the dolphin still alive

is fungie the dolphin still alive 2018

fungie the dolphin in ireland

is fungi the dolphin still alive 2017”

He’s pushing on at this stage, I first saw him over 20 years ago! It’s either a Jaws sequel situation where it’s a different shark each time (or dolphin in this case), or, and this is my pet theory, it’s just a guy in a dolphin suit at this stage. According to Wikipedia he’s been on the go since 1983, but that species of dolphin lives 25 years in the wild. It’s a guy in a suit. I’m looking for the zipper the next time I’m in Dingle.
funny fungie the dolphin memes
More Double Vision cartoons here.