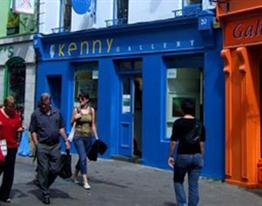 I was on my way into the Kenny Gallery the other day and there was a busker I know sitting far too close to the High Street entrance. I grasped the handle as I said hello to the busker and whacked into a locked door. I looked up and saw the ominous WE HAVE MOVED in every window. I went to Neachtains for soup, feeling mighty dejected.
I got a letter from Tom Kenny yesterday. The gallery has moved to the same premises as the bookshop went to a while back in Liosban. Obviously I wish them every success in the new premises, but something vital has gone out of the heart of Galway. I’d call in most days I was in town, have a chat to Dean for 10 minutes while he got on with his work, chat to Sean, Melissa or Mary on the front desk, and pop down the back to say hi to Tom and see whatever exhibition was on at the time. If I was lucky, Tom would start into a story, and I was lucky most days.
Maybe there was just too much calling in, I know I wasn’t the only one. I remember my dad’s short-lived clothes shop in Moville, and while he had plenty of callers he had very few buyers, and it used to drive him mad. Certainly now it’ll only be the motivated buyer calling in to Liosban, and I hope there’s plenty of them. But exhibition openings were an event in Middle Street.
Many’s the Friday night I’d have a quick sandwich and a quick dash to get in for an opening. You’d get into great conversation about art with someone just by dint of having an admiration for the same painting, then you’d see them at the next opening, and maybe agree again, and maybe not, but this was Kennys and opinions were as quickly formed as wine was poured, and sure we’re all bloody experts on what appeals to us. And seeing that appeal turn into a red dot gave me a vicarious sense of achievement for the artist- good man, good woman, you’ve kept the wolves away from the door again with your turps and toil.
Then it would be into the Bunch of Grapes for the sport of watching the Kennys make pints of stout disappear just by looking at them.
That simply won’t happen now. There’ll be excellent exhibitions there, and the gang will all be there, but it’s just different. The arse is hanging out of Galway City centre, and it’s not only the loss of Kennys making me say that: Galway was a hive of brilliant little places a mere decade ago (Punchbag, Seventh Heaven, Taylors, anyone?). Now it’s nearly High Street anywhere.

The Kennys have traded out of High St/ Middle St for over 70 years. That’s an incredible achievement, and a credit to the business acumen of the family. They’ve obviously got the nose for it, so if they’ve moved to Liosban, it must make sense, and I wish them all the luck in the world. I’ll be making a point of popping in to Liosban, just to warm the place up (and finish paying off that print I’ve been chipping away at!). Call in yourself when you get a chance. Map is below.