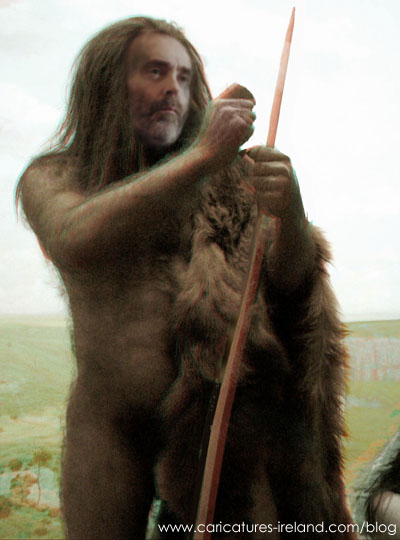 A few strands of flyaway hair were all it took to reconstruct an ancient journalist whose remains were found in a remote region of Ireland, scientists have revealed.

The man’s remains were found in the permafrost of a region of Ireland that is completely cut off from reality and were well enough preserved for scientists to extract his DNA. Based on genetic markers they have been able to reconstruct what he looked like, and from archaeological remains can tell he talked and wrote regularly, but could not ascertain if this involved much substance.

The man, who researchers have named “Jonwatta”, seems also to have had an aversion to extant technology. Contemporary finds have already shown that there was a highly developed social network between tribes involving small parchment messages of around 100-150 characters being passed to each other regularly. Jonwatta conversely appears to have cut himself off from the rest of his tribe and continued to write on the side of a mountain with a big stick and his own fecal matter. These were recovered at the site.

Paleomusicologists are confident that some of the scribblings found were an attempt at songwriting, but these seem to have little impact on the rest of Jonwatta’s tribe.

One of the lead researchers, Dr. Julian Incredibleness, described the scene of the find as quite poignant. “Jonwatta seems to have been feverishly scribbling right up until the very end” he said. “We found him frozen with his big stick in one hand and a handful of fecal matter in the other, and he was around 400 words into his writing. He had little frozen tears on his face, which meant he had tears in his eyes as he wrote this”.

More details in the Irish Times.