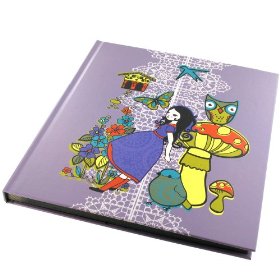 (UPDATE: the design studio in question is Gather No Moss).

Spare a thought for Hidden Eloise, a UK based artist who’s currently in dispute with Paperchase over one of their designs. Paperchase are selling tote bags and books that feature an element that’s clearly traced from one of Eloise’s paintings. I think it’s a bit strong calling it plagiarism, but Paperchase’s designer has clearly lifted the girl’s figure from the original painting, which is lazy, unprofessional and unethical. I made a gif to demonstrate the similarity:

The items were on sale on Amazon, but have been withdrawn, and Paperchase has made the following statement:

Paperchase’s position regarding the allegations of ‘copying’ made against the Company today is as follows:

Above all, we would like to apologise to any customers upset or angered by this allegation against us. Paperchase takes all reasonable precautions to check that designs we source or buy from individual designers or agencies are from reputable sources. In this case, we would like to confirm that Paperchase bought the artwork in question, in good faith, in October 2008, from a well-known central London Design Studio along with a number of other designs.

The illustrator who is making the allegation made us aware of her concerns in November 2009 and we duly responded to her in early December, since when we had heard nothing….until today. Back in November 2009, we spoke at length to the Design Studio in question and they categorically denied any plagiarism.

It is worrying that such an allegation can create such reaction and again, Paperchase apologises for any ill-feeling caused.

Paperchase’s statement is really not good enough. Paperchase should agree an a fee with Hidden Eloise and not work with the other design studio again (I have my suspicions that “Design Studio” uses Google as a design tool). Continued denial of what’s indisputable, that another artist’s work has been incorporated into their products without recompense, will only harm them in the long term.