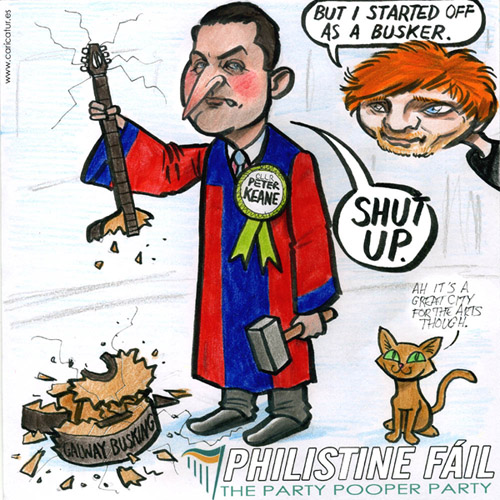 
Galway City Council has voted 12-6 to place restrictions on busking in Galway City, despite Galway buskers attempting to negotiate a voluntary code with them. Circle shows and amplification are affected, and drum kits are just banned. Galway is another one of those conservative places that officially puts more stock in the perceived inconvenience of busking than the vitality and life it brings. We’re sterilising Ireland piece by brilliant piece thanks to the likes of that pompous stick-up-his-hole Cllr Keane and his voting buddies.

Fianna Fail’s Peter Keane, who proposed the measures, described them as “mild measures”, which were not an attempt to quench busking.

Sure Peter, sure. Art and creativity only exist for them if there’s vol au vents on silver trays being served nearby. They’re sitting on the necks of buskers snatching the crusts out of their mouths. There’s a dividend to busking that makes Galway an attractive place to visit, which make no mistake, finds its way into Galway’s tills. There’s a consequence to imposing arbitrary restrictions on busking that will be reaped too, and our “representatives” will be scratching their dumb heads wondering where all the tourists and their lovely money went.

2 thoughts on “Is Peter Keane the Biggest Prick on Galway City Council?”