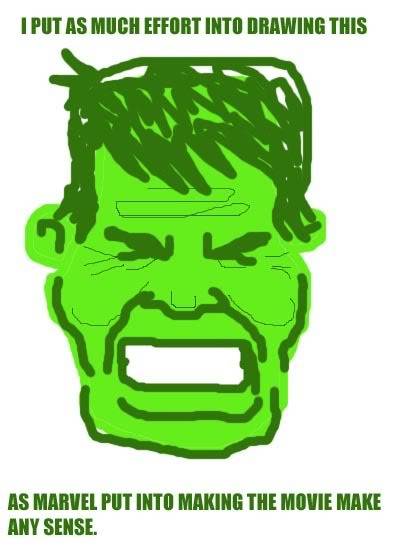 My son brought me to the Incredible Hulk yesterday for Fathers’ Day. I paid for the tickets and he paid for his cola and popcorn. I’m just adding it to the running total I’m going to hit him with when he gets his first job.
Anyway the ‘requel’. Any film that demanded a neologism was going to be in trouble. I’m still in the dark about why they couldn’t just make a straight sequel to the Ang Lee version with the same cast. If what I saw yesterday was supposed to address the criticisms of the Lee version (ropey CGI, unbelievable bad guy/poodles, too much backstory) they missed the goal by turning up at the wrong pitch on the wrong day for the wrong sport. The Incredible Hulk foregoes backstory in favour of montage, avoids characterisation as if it were something requiring an embarrassing visit to the doctor, and has a bad guy that goes on a rampage of destruction for no apparent reason than he wants a fight. How motivating.
It’s no spoiler to say Hulk beats the Abomination but stops short of killing him at Betty’s whimpering behest. Alrighty then, there’s a fragment of the man that can be reached when Bruce is transformed. So let’s conveniently forget that Abomination has incredible regenerative powers as well as strength and can just return to the rampage as soon as he gets his breath back because the time is up, the three acts are done and it’s time for Tony Stark’s pointless cameo. So where were you when New York was getting destroyed, Iron Man?
Hulk smashes a car in half to wear as steel gloves. Nice of them to include gratuitous special moves from the game. This isn’t a standalone film. It’s the film of the game.
Also good review in the Guardian. Via Unarocks.

1 thought on “Incredible that they thought this Hulk would be better than Ang Lee’s.”