A couple of weeks ago I was playing around with Google image search, with which you can drag and drop an image and Google will return a similar images results page. I dropped my old Twitter avatar (see below) into search, and there I was, with a different coloured background, on someone else’s website. Curious, I clicked the link, and found this: 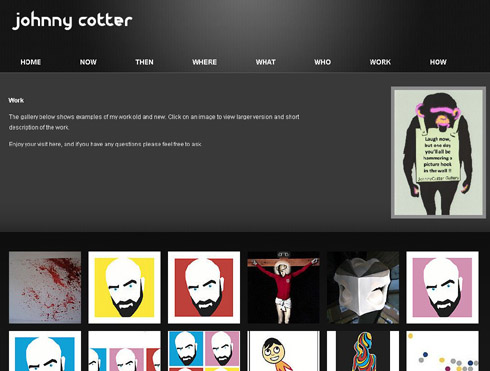 “The gallery below shows examples of my work old and new.” My avatar was being cogged by Johnny Cotter, of Folkestone, Kent. I was being plagiarised.
I immediately send an email demanding my work be taken down from his website. I was furious, and vented on Twitter. Within minutes, I’d been directed by others to his (now deleted) Facebook page. Framed prints of my avatar were clearly on sale. 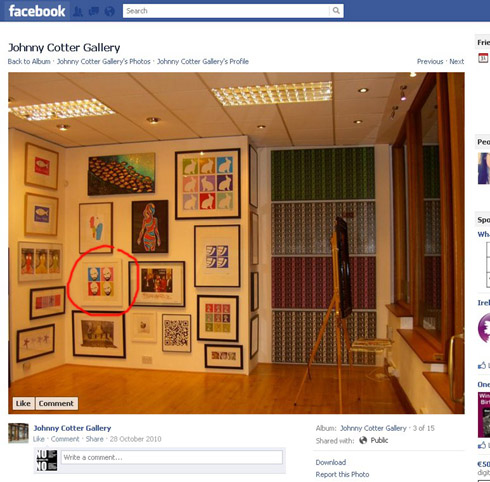 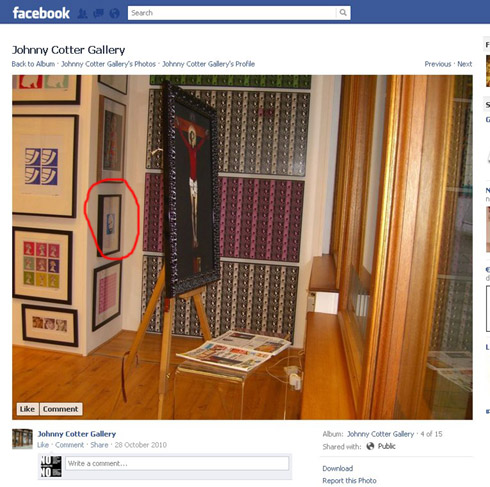 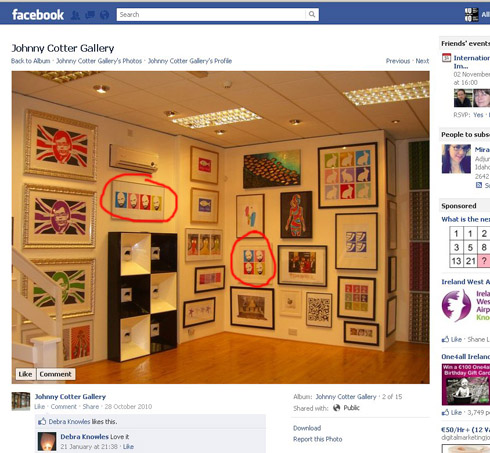 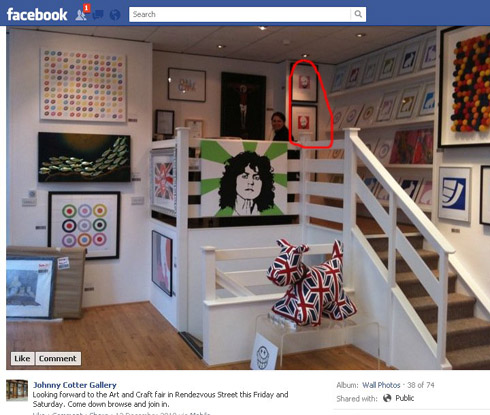 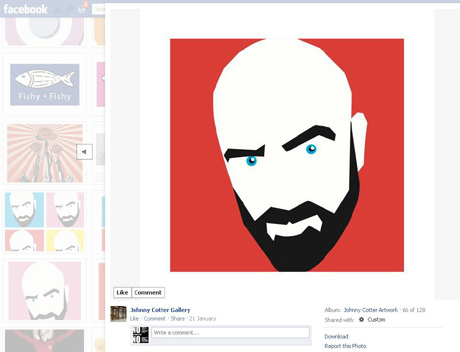 Mister Cotter also felt entitled to claim copyright on my work as displayed on his Flickr page: 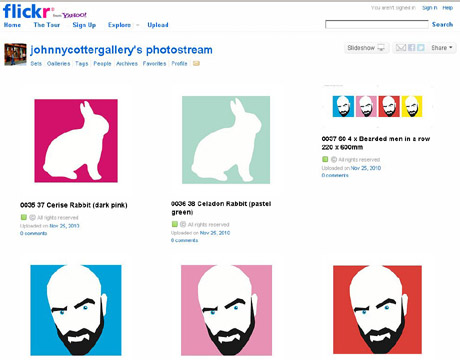 This is controversial artist John “Johnny” Cotter, with one of his execrable creations: 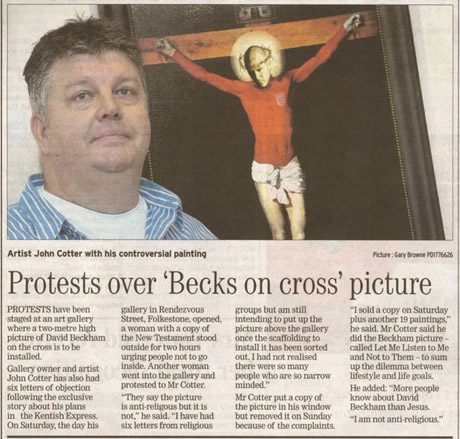 I got the following reply from John Cotter:

Got your email and I am a little shocked.
I have looked at your caricatures site and noticed your avatar which I guess you are referring to.
A friend helped me with photoshop as I didn’t know the programme at the time. I sketched out a cartoon style Charles Manson and showed him a few William
Opie images as the style i was trying to achive. He went off and followed my instructions and hence the image was created.. Or so i thought, i will remove it as i can see its a direct copy. I will take it up with him as i paid him a technician fee for the hours he spent on it.
I am launching a new site midweek and the images do not feature as they didn’t sell.
Apologies, i guess i’ve been had more than you have.

In the meantime, the story spread over Twitter and Facebook. Dozens of people were tweeting John Cotter, and calling him out on Facebook. He then deleted his Twitter and Facebook accounts. I got another email telling me his shock at getting so many messages, and ill-informed Chinese Whispers. Well, you can see the evidence above. I don’t think anyone was adding purple monkey dishwasher to their comments.

As he’d been selling my work as his own I invoiced him. There was an exchange of “my solicitor is bigger than your solicitor” emails & I refused to take his calls as I wanted an email trail.

He then made me a smaller offer, which was interesting in light of his claim they didn’t sell:

I have spoken to my solicitor today who referred me to a specialist solicitor in the matter. He has advised me to write the following to you in the first instance.

I have apologised to you for the unfortunate copying of your avatar and explained the circumstances that lead to this. I immediately deleted all references to your avatar picture.
If I had had the opportunity to speak to you when I called this morning you would have known that I had sold 1 picture containing your avatar artwork for £155.00 on 9/3/11 at 15:39 hrs.
The profit on this sale, the only one featuring your artwork is £95.00. My suggestion would have been this morning to pay you the £95.00 or as an act of goodwill pay £155.00 to the Hospice shop opposite my gallery as a donation and send you a proof of deposit receipt. This would resolve the issue of not profiting from the said image. (I await your instructions).

I have also been advised to ask you to post a message on your Twitter and Facebook sites stating that a genuine error has happened, as many of your followers are not only acting in a defamatory way, but also, are suggesting my premises gets firebombed and I am attacked. You may be liable for any injury or loss of trade from my premises due to this.

I am very embarrassed about what has happened. I tried on several occasions to call you and settle the matter and apologise and now unfortunately you have continued to fuel this unfounded hate campaign. I believe one of your followers said its fun “badger baiting” as a direct reference to the bullying tactics used.

I am not proud of what has happened in fact I was mortified and have discovered that 2 more pieces prepared for me by my friend acting as a technician were in fact copied from other Avatars. This I am dealing with.

My solicitor has also instructed me to call in the police, reference the various posts that have been “screen printed capture” suggesting violence against me and my gallery.

Once again before this gets totally out of hand, I urgently ask you to help resolve the above.

Obviously by this stage I had trust issues with John Cotter so I elected to get paid for the sale of my work. I received this payment promptly. I could have gone to court after him for proper compensation but you can see the scale the task that would have been. I should also point out that I never incited any kind of violence against Mister Poopy-Pants or damage to his property, but I’d imagine John Cotter would expect Knorr to pay him damages for having burnt his tongue on one of their packet soups.

As he was so adamant it wasn’t his fault I asked for the name and contact details of the mysterious technician. Guess what?

As stated in earlier Emails a friend acted for me in a “technician capacity”. This was a “one off”, as I was just starting to learn photoshop. They have no files containing any of your images. They do not trade it was simply someone who knew photoshop. I will not give you their details as I would not want them to go through the harrowing experience and fear that I have been subjected to over the past 48hrs.

In hindsight it was a huge mistake on my part not learning the programme before starting out.

I assure you there are no files or hard copy prints, all have been deleted or destroyed.

I imagine you are a hardworking decent guy like myself. I don’t imagine you have ever been subjected to a social media “witch hunt”, “badger baiting” or “Internet bullying”. I know you were mad, I would have been too but the onslaught and barrage of ill-informed comments and posts put up by your followers forcing me to suspend my Facebook and Twitter accounts was punishment way beyond the crime of unknowingly using your avatar. I feel you should know that one of your followers contacted friends of mine to give them a heads up of the situation, and whilst they said they did not condone what had happened they were shocked at the response of many people becoming a mob and suggested to my friend I may need some friendly support. This action renewed my faith in humanity.

I say the above not to try and get sympathy but to try and convey the damage, hurt and terror that this causes.
I hope you understand what I’m trying to express.

For the above reasons you can rest assured I have deleted all files and even any photograph with the image featured in it.

Lastly I have spoken to Folkestone Police today under advisement due to the property damage and physical violence posts. I have fully explained the chain of events and reason for the internet attacks on me. They have logged the matter and issued a case file reference number.

Johnny Cotter’s the victim in all this folks. According to Johnny Cotter. And no, I’ve never had a deluge of angry comments from decent people inflamed at seeing someone ripped off, probably because I’ve never sold other people’s work as my own. I got a number of commissions from that avatar series when I started doing them initially for friends, including a sizeable commission from Bord Gais. John Cotter slipped my work into his portfolio and passed it off as his own. Who knows what other work he managed to get from my effort? There’s a hell of a lot of talented freelancers out there busting their arses to make a living, maybe that’s why there’s such a visceral reaction when someone’s caught out making easy money by stealing someone else’s work. It fills me with warmth, however, that so many people had my back on this (special mention in particular to supersolicitor Simon McGarr).

We should also remember my face is now hanging in at least one Kent sitting-room. They think I’m Charlie Manson.

25 thoughts on “The curious case of the stolen avatar, and how sometimes the internet has your back.”